This is an archive of a consumer complaint published against Dr. Tugrul Maral at DirtyScam.com-

What can I say? I am fuming while I write this report. It was nothing less than a disaster experience. It all started with a call. A call that I made to their clinic, a month back. After talking to a friend, I decided to go for a transplant. He suggested that I should check for someone out of the USA as the prices were too high. I took that advice and started checking few names.I would rather say that he got lucky. With this I mean, I was looking for another doctor that I was referred to. But, when I tried to call him, his number did not connect, and I had few on my list that I searched from internet.His number got through in the first attempt and I was connected to the receptionist. She was charming with her words and was able to speak fluent English. This made our conversation easy. She told that she would be mailing all the details about the transplant and charges to get me going. She sent a link with previous cases as well and they were fantastic. What else did I need?So, I booked the first appointment that was available with Dr. Tugrul Maral. It was a month later. So, I did all the bookings and applied for the VISA and all necessary things that I was required to. After a week, I got a call from the lady and she said that she wanted to reschedule the appointment as something came up.I had to make arrangements and lose some more money to change the booking dates. But, I did it. I was looking forward to the transplant. So, the date arrived and as per the flight timing, I checked in to the airport and left for Turkey.The place was beautiful, and it was the time for festival, Ramadan. So, everything was expensive including the cab fares and hotel charges. If I had been here as per the previous booking, I would have saved a lot. Anyway, I arrived at the hotel in the evening and my first appointment was planned for the next day.I was tired and slept early. When I reached the clinic, I was welcomed by the lady I spoke with. She directed me towards the room where Dr. Maral checked patients. I was nervous and the way Dr. Maral spoke with me, it made me feel even worse. He is not friendly at all and likes ignoring questions.He drew my hairline and without consulting me, he asked his assistant to get me ready for the blood tests and other procedures. I looked at him clueless and he sensed my confusion. To this, he said just few words, you are in good hands.I was taken through different rooms for ECG and other checkups. Most of the equipment seemed old and broken. The clinic was not cleaned since months, I could tell that with the smell.After the basics, I was introduced to the anaesthetist. He was young and at least was talking. I asked if it would be a lot painful. He said, it wouldnt. That was a relief. He said that I would feel only two three pricks at start. But, he was wrong. I cannot say the way he handled me. And, dr. Maral was doing it alone. I had to go through 5800 grafts and the way he was moving, it took him life time to complete the grafts.In between, I asked if he can accelerate the process with his assistant. But, as usual, he looked at me and did not say anything. I took that as NO. After the transplant, I reached hotel. The redness was for more than a week. I had pain too. Dr. Maral did not bother about attending me. I was given some instructions. And, their responsibility ended. I had to consult a doctor after returning. The worst part is, I did not like my hairline. It is awful. Anyone can make out that I underwent HT.I had the worst experience with dr. Tugrul Maral. Never opt for his services. 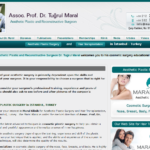