This is an archive of a consumer complaint published against Dr. Veronica Jow at DirtyScam.com-

I came with a debilitating back injury. The pain would come on very strong, sometimes radiating throughout my hip and groin.It was crippling. To just put on my shoes took several minutes.I was told that the appointment was over because I was a few minutes late (again, even putting on my shoes took a lot of time with such pain).Veronica said that I could come back if I lost sensation in my foot.The insurance company was billed and I was ordered to make a copay.I left not knowing what was wrong with me.It turns out I that the problem was much more serious, as was later confirmed by radiology (MRI) ordered by a different physician.UPDATE 2016-12-18: If you had any integrity at all, youdve asked to see that MRI to see where you went so wrong.Youd apologize for the negligent misdiagnosis. Instead, you continue bill for OneMedicals time-wasting professional failures, for which the insurance company has already been billed. (Gee, I wonder why health care is so expensive) 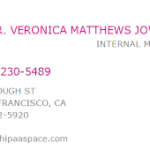