This is an archive of a consumer complaint published against Dr. Wang Constance at DirtyScam.com-

I called the clinic after hours because I was having very painful and uncomfortable UTI symptoms.As I recognize that a UTI is not an emergency, even though it is unbearably uncomfortable, I thought calling a doc was a better choice than urgent care.Dr. Wang Constance called back almost immediately, which I wasnt expecting. Unfortunately she was very rude and condescending to me because I called the clinics answering service early in the morning.Ive never called a clinic after-hours, and frankly, as a patient, its not my responsibility to know what message is worthy of forwarding on to the doctor immediately and what is worthy of an immediate call back. Thats the job of the answering service and the doctor.Furthermore, doesnt it make sense that a patient would call for something that feels urgent but they know isnt an actual emergency? If it was an emergency I would have gone to the ER.I understand that you dont want to answer calls early in the morning, but you can be mad at your clinics after-hours protocol, not at me for not knowing how the system works (especially because there is NO info online about when its appropriate to call the clinic after hours).Dr. Wang made me feel like an idiot that was greatly inconveniencing her and that my (very painful!) medical issues werent worthy of her time. 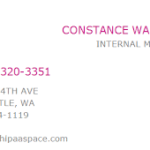