This is an archive of a consumer complaint published against Dr. Yuan-Da Fan at DirtyScam.com-

Dr. Yuan-Da Fan may be a good doctor on the medical side, but personally I prefer a different kind of interaction.I first saw Dr Fan a few days after Id had a miscarriage during my first pregnancy.I was kept waiting 45 minutes after my scheduled appointment time, but was then treated in less than 3 minutes (I looked at my watch).I was expecting to spend a while in his treatment room asking questions, giving him my previous ob/gyn medical history (Im British and my records are still in the UK), trying to find out if my approach to my health during pregnancy had been OK, and getting reassured that everything was now alright with my insides.Instead, he wasnt listening to my questions but talking over the top of them.After rushing in and performing a very quick ultrasound exam, while talking constantly, he dashed back out of the room.I continued to lie on the treatment bed because I assumed he was coming back. After about five minutes I got dressed and went to reception, where I was presented with the bill for $180 (I have a foreign insurer and have to reclaim it myself). So far, so strange.A few months later and pregnant again, I went back but got the same deal  a 45 minute wait, and then a quick ultrasound and he leaves.When I found him, he told me to make an appointment later in the month.I asked why he wasnt planning to do the standard blood tests and general health check, and why he wasnt making any notes or taking my previous history.He told me that Id come too early in the pregnancy (why didnt they tell me this when I booked the appointment, before I took the afternoon off work, travelled across town on the bus, and waited nearly an hour to see him?) Since I was 5 weeks into the pregnancy, and have a history of miscarriage, this response was not reassuring.I wanted to ask questions, and he did answer them, but by this time we were in the corridor, and I had to keep saying “hang on please  Id like to ask you about . to stop him rushing off.So again I got the impression that he was in a massive hurry and couldnt wait to hustle me out of the door.HIs answers were also somewhat confusing. Again I then received a $180 bill for a 3-minute appointment.Dr Fan seems to be a pleasant enough person, and his style may be fine for some  but personally when it comes to my obstetric health, I prefer not to feel as if Im on a factory production line. Im switching to another doctor. 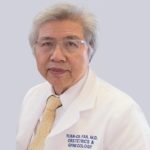