This is an archive of a consumer complaint published against Dr. Zhaoyang Pan at DirtyScam.com-

Nice and friendly staff. Long-ish wait, but they did agree to fit me in at end of the day. So thats the good stuff. Unfortunately, the “good stuff is vastly overshadowed by the bad — in a name, Doctor Pan. Zhaoyang Pan is an extremely rude man.As with most visits one makes to see a doctor, I was hoping for help and answers.I did not receive either. Pretty much any question I had, Dr Pan either flat out ignored me, or responded with combative rudeness.Which was a bizarre experience to say the least. At one point the situation became weirdly aggressive and I had to explain why I would even come to his practice (it was assigned to me by my new insurance as I recently moved and dont know the new area, though one would think a doctor would want new clients).After an extremely quick time with the doctor (10-15 minutes after waiting 1&1/2 hours) he just up and decided he was done, physically ushered me out of his office and left me with his assistant and disappeared.I was very confused. Another waiting patient (innocently; he was a sweet old man) pointed out to me that I was the only individual present who wasnt of the prevailing ethnic/racial background, so I hope the rushed and rude interaction I experienced with the doctor wasnt racially motivated.Again, everyone else was very nice. Zhaoyang Pan was not. 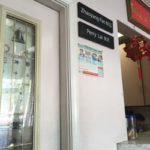