This is an archive of a consumer complaint published against Duke at DirtyScam.com-

The scammer is active on Interpals. He claims to be Timothy Plasencio, Sergeant F.C. in the US Army. Among others, he is ready to retire while being active in Johannesburg, South Africa..sorry i was not online and its due to my duty and most time its bad signal here in camp,FC means First Class,thanks for telling me in a short line about yourself,Regi My names are Timothy Plasencio,i am from Houston Texas in United states but am based in Yemen due to my Job. ,I am deployed with the Special Forces Operational Detachment-Alpha team assigned to Company B, 82nd Airborne Division.Im deployed in support of Operation Enduring Freedom as a member of the Combined Joint Special Operations Task Force Yemen I am 40 years old and also a widower with one son who is just twelve years old.My wife died of Heart-Dis-Orders eight years ago when my son is only 4 years old. Since then i have been a single Father.My son name is Gregory Plasencio and he lives with my nanny in houston texas united states. 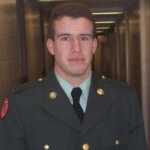