This is an archive of a consumer complaint published against Elevations Credit Union at DirtyScam.com-

I was in search of a personal loan in the amount of 5K to cover some dental expenses.Having a young credit history, but good overall credit profile, I decided to start applying for my personal loan through Elevations Credit Union after being turned down by big banks.My applications were denied by the big guys for one simple reason: lack of credit history (whatever that means).I have never had a loan but do have several credit cards. For some reason, large banks see it as a risk to lend to someone without a history of loans.It doesnt make sense as to why, if the person has a good payment history and score.I mean we all have to start somewhere right?After reading positive comments and experiences with this CU, I decided to apply online for a loan.The application portal was cool and neatly designed.I applied online and the instant decision computer robot said my loan required manual review.A day later I received a call from a loan officer (whose name I have completely disregarded because he sucked that bad) leaving me a message stating to give him a call back as he had a few quick questions.His tone was generally positive, so I called him back and spoke for about 5 minutes.He said I have a great credit score and profile so it shouldnt be a problem approving my loan.Then, the weirdness happened. He told me he was sending my loan up for additional review and I would likely get approved.Hes a loan officer so why would it need further review by someone else? Its not like Im asking for $20,000.He told me he would contact me in 1-2 business days. I continued to check my application status online and suddenly saw it say “denied.The reason? Lack of credit history and too many inquires.Again I dont understand the lack of credit history as I have several cards and payment history with the cards.As far as the credit inquires, of course Im going to have a lot in a small period of time as I was shopping around.Makes sense right? I sent him a message through the application portal expressing my displeasure.Credit unions are supposed to be down to earth and have a desire to truly help their members as opposed to treating people like just a number.That was by far my experience here. The fact he led me on thinking I was approved was thing, but the reasons for denial given to me are pathetic.Thankfully, I applied for a loan through another credit union and was approved with no issues whatsoever.Glad I am not a member of this credit union and advise others to stay away. 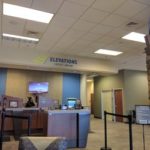