This is an archive of a consumer complaint published against Eurodate at DirtyScam.com-

Money scam by Eurodate.com! Ladies and Gentleman, please be advised that you understand all of the fees for using eurodate. Yes, its free to sign up, but you have to pay to start chatting, email, they even mention whatapps. So here it goes. After you sign up for membership they give you an outline that breaks down the prices, be careful! because your emotions sometimes gets the best of you and you are not even aware of all the charges you are accumulating. Till you get the bill or if youre lucky like me my bank called me right away.You pay 2.99 intro fee then after that you buy by credit so for 15.99 you get so many credits so you like couple of men that you selected and they are so well versed that they now what to say and when to send you short emails then they send pictures every action you do theres a fee. By the time my bank called 30.00 minutes later I had been charged around 105.00 that was the first time to ask customer support why I was charged so much plus I didnt authorize automatic withdrawal! They pay themselves first.Then they get several other men to send you an email one sends you a sticker of roses but remember everything is being charged! Emails are sent in small sentence because so many characters are charged. All the men sound like robots, they say almost the same thing or if you ask a question they dont answer it.I asked one gentleman if he could email me or whats app because of my funds, never got an answer you see its a way they keep you paying them Money before you know youve spent 500.00 and every single men in this site get part of the action they are role playing actors. Some would only say HiBut they never answer a question never! And they will not contact you! This is a site that makes money off good men and women Please stop using it! eHarmony is a great site . Plus I talked to other women and they said that alot of the men, Especially from Ukraine all over its an organization that knows how to take your money and they dont care if they leave you in the street !Empty bank account! Feeling violated!!!! 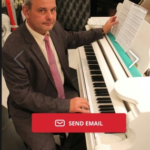