This is an archive of a consumer complaint published against Factory Direct Homes at DirtyScam.com-

We went in to purchase a home in June. This process was a nightmare from the very beginning. The papers for the home were signed in July.Delivery of home was October of 2013 and move in was end of November. This was a custom built home.We customized this home to our needs and wants. They kept changing the customization of the home by the factory.We constantly were having to contact the sales person Ukiah Bunn to confirm changes or he called to confirm changes after we already told him what we wanted.The only thing we were told is the home is being worked on.and no process timeline was ever given to us when the home was even started or even finished.They even refused to tell us even how many homes were even ahead of us to be built.The finished product was not what was expected and many things were not as expected such as the dimensions were changed for many of the rooms which made them smaller than expected.The bathrooms lack of light., fixture placements of dining room, carpet placement incorrect, and closet had no room in them.These are just a few of the changes made that we did not authorize and were changed.This took five months without any communication other than telling us it would take three weeks to build the home and no other process timeline was ever given to us and we ask on many occasions for this information.This was such a bad experience if we could have done it all over we would have not gone to Palm Harbor/Factory Direct Homes.I would suggest anyone wanting a manufactured home go elsewhere to get there home built. 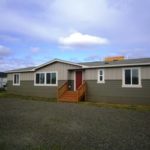