This is an archive of a consumer complaint published against First American Title Company at DirtyScam.com-

We were assigned to First American Title Company during the purchase of our new home.During the entire process we received really poor communication, follow-through, and professionalism from the people we worked with.We have already closed escrow on the property, and today they have called to say they did not pay off loans that were supposed to be paid off at closing.They were calling to find out the payoff amounts for the loans!I had already provided the payoff and daily interest information MULTIPLE times, AND the amount they had to pay is on the settlement statement!The notary they sent did not come with copies of the documents for us!She said we could get them afterwards electronically.I have already requested the electronic version three times from two different people, even confirming my email address, and have yet to receive them!They repeatedly say oh yeah no problem no problem and it never gets done.Be wary of the other reviews for this company.Take note that of the 8 reviews this company currently has, the 7 five-star reviews were ALL in April of 2012 by users with few other reviews (I smell promotional/conflict-of-interest reviews).The only review outside of this April 2012 time-frame gave the company two-stars. take notice, think critically, and Beware.We worked with North American Title Company for the sale of our current house, and the experience showed us what a quality title company should be like.If you are assigned to this company, ask to be reassigned. 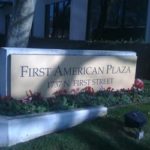