This is an archive of a consumer complaint published against First National Bank Arapahoe Branch at DirtyScam.com-

I began a refinance on my home mortgage with First National Bank Arapahoe Branch, because I had a friend who was a Loan Officer here.Everything went fine with the process until he left the company.I was able to close on the loan easily, which I was thankful for, however once it was time to make a payment, everything went array!I was told my loan would be given to Nationwide  so I called Nationwide.They had no record of my loan! I call First National, and nobody but this actual location could find me in their system.I contacted the people who finished my Loan after my original Loan officer left.They told me that I had to get to the bank ASAP and make a payment or I would incur a late fee.I drove out of my way to go to the bank to make a payment, only to find out I couldnt Pay because they had sold the Loan to Nationwide that same morning. Unbelievable.My loan basically sat on someones desk, forgotten, until I tried to pay on it and they realized they messed up.On top of that, the tellers in the bank were rude and condescending.Im glad my loan has been sold to another bank. I will never do business with first national again!! 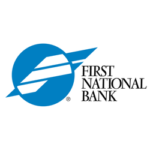