This is an archive of a consumer complaint published against Franklin Hatchett at DirtyScam.com-

I have tried many courses till date and some of them were really great at making things clear. I started my dropshipping business a year back and have made decent profit. I was looking for some tips to multiply it and that was the same time, I came across this course that Franklin Hatchett offers. This was a clear gamble as I have come across many courses that do not provide what they claim and after researching a lot, I decided to put my money on it.At least unlike any other course, it appeared a bit cheaper. I had to pay $200 and I was okay with that. When I joined the course, I was given access to many videos and content that is claimed to be created by this fancy guy. Before I talk about the content, let me give you a brief about this person. When I talked to him on the phone, he was pretty excited to take me on board. He said that he has done a great job of helping many of his students make 7 figures income in couple of months. He did mention that I would not be able to make money from day one but he also suggested to follow the instructions clearly to get maximum help.I bought whatever he said. It is not that it was the first time someone had tried to trick me into buying something. But, this guy has it all. He knows how to convince people by talking about what they are looking for and not what he wants to show them. I could not understand what he was up to and I paid him the full amount. I also asked him to send me some examples of students who have made it huge after completing the course and he agreed to that.I paid right away for the course. I even emailed him remining the list of students that he promised to send across. However, he did not say much after that. After I sent him mails trice, he replied me saying that it was a private information and he would not like to share it with anyone. I felt cheated.But, I had to complete the course and did not want to give up right away. I understood one thing that this guy wasnt very legit. I also thought that may be he was trying to get me on board and promised a little more than usual. And, I wanted to give my best shot to the course at hand.I did go through every details and matched it with his online free YouTube Videos. I found him repeating most of the things too many times. He has the basic knowledge. But someone like me who started everything on his own a year before must be hungry for something unique. I had clearly mentioned it to him on our phone call.To which he agreed and told me that I would be getting some of the best tips and tricks that wont be available anywhere. I have a question: If you are such an expert in this, why dont you keep the knowledge to yourself and make huge money through dropshipping itself. This question crawled only after I was scammed. I do feel bad about it. However, I finished the course thinking that I would get something out of it.I completed the course a month back and did not learn anything new that I was not aware of. Not just me, I happened to bump into someone who was also going through the same course from the Facebook account and he had the same reviews. He was studying and was looking for an income source to pay for his college. He said that he was not able to set up anything and this course did not help at all.I offered some help to that guy as I had my business up and running. However, moving forward, when I found that course to be a complete junk, I called Franklin few times to ask for a refund. He guaranteed the first time we spoke that the course would be real help and if not, he would be returning the money right away. But, he denied. He said that there was no flaw in the course and I was lying that it did not help to get my money back.I have not seen someone like himself. He called me a fraud. I am not going to ever recommend him to anyone. I would rather make sure that his reality is clear to everyone. He should be banned from taking money from people online. He is not the kind of guy anyone would like to trust.He made me go through so much loss. I invested money and time which I could have invested in something useful. That never happened. This guy ensured that I never find anything out of the mess. No solution. He never gave me in written that he would pay me back and so, he wasnt obliged to do so.I mailed him the problems with the course that I faced and he slept over it. It all got so messed up that I had to stop asking him for my money which I knew was never coming back. But more than the money, I needed to bring the truth on the surface. This guy has cheated, I do not know how many people. But I do know is that he is a cheater.The course does not have anything special about it. You can get a lot of free stuff online which would add more value to your business. Dropshipping business is not easy but it is doable. There are many people who are making huge sum of money through this kind of arrangement and many others could do it too.If you wish to save your money and do not want to get trapped in a worthless course, stay away from Franklin Hatchett. 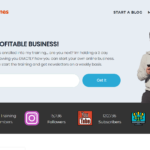