This is an archive of a consumer complaint published against General Steel Corporation at DirtyScam.com- 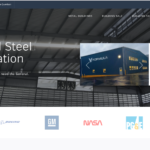