This is an archive of a consumer complaint published against Hendricks Regional Health at DirtyScam.com-

I wouldnt and couldnt recommendHendricks Regional Health tal for any one using AThe treatment I received was deployable. I was there for a 2nd hip surgery.The 1st went very well. Pay source was marked as private pay. Because I had no insurance.The 2nd was Medicaid. What a major difference. The 1st time I was there 3days the 2nd I was out the door 24 hours after being admitted.Without the proper exercise from rehab what should have been 6 pages end with 1.So 7 months later I cant walk! Back to the Dr. A 3 hour trip in pain. To hear him say it not the hip its the muscles.Ya think???? I was humiliated when they change me in front of my visitor.Because unknown to me I had wet my self several times Before I was changed.So they decided to change me while a friend was there. Never asking her to step out.I was still to numb to stand so the drag me to a bedside commode.Clean up and than changed the bed and put back. Saw the Dr. 1x he couldnt even look me in the eye. Took them 3 attempts to give me an epidural before the Dr. stepped in to do it.That was very painful. The next day I was booted out. Now with a new hospital.‘m getting extensive rehabilitation for my hip 9 months later.But now Im walking with a lot less pain. No I would recommend this hospital for any one using Medicaid services. 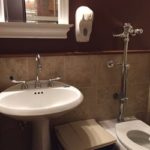