This is an archive of a consumer complaint published against Horowitz Real Estate at DirtyScam.com-

Ive worked with a lot of brokers in Manhattan and Astoria, and hands down, my experience working with Peter has been by far the worst.After seeming shocked that I didnt jump on the first apartment he showed me, he showed me a second the next day, which I fell in love with. Things rapidly deteriorated after this.45 minutes after seeing the apartment, I emailed him to reiterate that I loved it, and that I wanted to apply, but had a couple of questions first (Like, did the appliances work? Any history of roaches in the building? Etc) Less than 15 minutes later, he reposted the same apartment on his website, with a price almost $200/month HIGHER than it had been listed for.I repeatedly emailed him, and didnt get a response for over a week.When I finally heard back, he said he couldnt answer any of my questions. I asked if he could direct me to someone else who had the answers? He said no.I asked if I could see the apartment again? He said no. I asked if I could speak to the current tenants? He said no.This saga went on for over two weeks. I finally got to see the apartment again, it was still available, but he was still unwilling to even try to negotiate the price down to what it had been listed as, telling me that I would be throwing my application fee away if I didnt offer the highest price.He actually laughed in my face on the sidewalk when I said I was only willing to pay the price hed told me it was.Fast forward to almost a month later apartment is still available, and hes dropped the price back down.A phone call and three emails later asking when I could drop off my deposit to him and, I still never heard back.My GUARANTOR heard back over a week later that it had been rented. I still havent heard a word from him.I withdrew an application on another apartment when I heard this one was available, and it was due to Peter dragging his feet (again) that I lost it (again).In mid-June, I was ready to sign a lease beginning July 1, and it took until July 15th for this fiasco to end.This is just plain old bad business, Peter. Bad business. I would advise any renters to steer clear. You can do better. 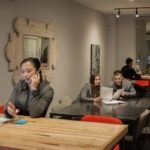