I Got A Deal Used Cars Review

This is an archive of a consumer complaint published against I Got A Deal Used Cars at DirtyScam.com-

Original Complaint against I Got A Deal Used Cars published at DirtyScam.com says, verbatim –

I went to I Got A Deal Used Cars shop in Birmingham, AL upon a recommendation to get the cracked windshield replaced on my Lexus. What a BIG mistake. The owner took nearly 3 hours to replace my windshield.When I went to ask what was taking so long, he handed me one of the tools while he stood over a large pile of glass that looked like he had butchered it.He told me that he does not usually replace windshields on Lexus vehicles, but said nothing about this when he quoted me a price and took my money up front.Suspicious of the work, I drove my vehicle to 2 more well known, reputable shops and asked what they thought about the work.I was told that it was shotty work that had been installed completely wrong and would cost another $600 to correct because an important part had been removed and not replaced.I returned to speak with the owner of “I Got A Deal who did the replacement about the problem and his attitude was very disrespectful and uncaring.While yelling, he even told me that I should have never brought the car to him in the first place!(What business owner says this especially after taking your money!!?) Buyer BEWARE! “I Got A Deal IS NO DEAL!! 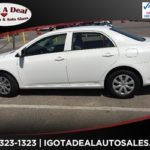 Visit the external source link
I Got A Deal Used Cars