This is an archive of a consumer complaint published against Ihara Team at DirtyScam.com-

I would not recommend the Ihara team, Keller Williams Honolulu, real estate service.I listed my small condo in Waikiki for sale with them and have had a stressful and bad experiences.Dan Ihara was referred to me by a referral agency and I met him in mid March who came to my place with a young woman whom I thought was my poc agent but not.I thought he was fine and honorable at the time except that he wanted higher commission than most agents would ask for but soon he agreed on 5% total commission so I signed the “right to sale contract with him.About a week later, a guy name Kent from Ihara team called and said that they got an offer on my unit and wants to come over and discuss.He too came with a young woman but not for my agent.Anyway, when I review the offer, I didnt felt right about it so I explained to Kent and told him I wanted to wait for the right offer but for some reason he kept called to say I should accept that offer for almost a week so I thought, maybe I should listen to an expert, he should know more about the offer/offeror than what I felt plus I wanted to have a good relationship with the listing agents so I felt pressured to agree with Kent and accept the offer.But alas, escrow failed a month or so later and this guy didnt even tell me about failed escrow for several days.I was very disappointed and regret listening to so-called expert and not sticking to my gut instinct!The right to sale contract with Ihara team was for little over two months, Dan wanted longer, over 3 months and I reluctantly agreed but he wrote on his contract for shorter time, perhaps he miscounted on months and days.After such disappointment of failed escrow, I asked Dan to cancel or withdraw his contract if he could but of course he didnt so I was to wait for the expiration date in a couple of weeks.However unexpectedly, a cash offer came in and though it was lower price than I wanted, I was willing to accept it but with one condition with Ihara team, lower their commission by .5 or 1/2% since I lost time, money and suffered much stress due to an offer that I didnt wanted but pressured to accept and failed.But the fairest for me to cut the commission was that I am the one who did all the showings, I did the most unpleasant jobs for agents, showings.They never came over for a single showing out of about two dozen showings.All they did was to sent me the notice through showing time apps and I did the rest.Dan was angry and said that I told him I wanted to show, huh! When I met him in March, I mentioned that I dont mind showing my unit to help sale if needed but never thought they will completely gave their job for me to do, what a nerve, so its only fair to discount .5% commission (still paid them over $10K) and is more than fair for what a job they did.Dan yelled at me on the phone when I told him, said “you are not nice person, etc that he spent thousands of dollars for my unit, etc when I got loud responding to his, he said he is recording the conversation, I told him that is great!Eventually he did agreed to lower his commission so went forward with cash offer.On the day of final walk-through, no one from Ihara Team showed up, no phone call, no text, no response to my email if anyone will show up.I was so embarrassed when buyers agent came and asked where sellers agent was and said she never had final walkthrough without the sellers agent present.I apologized to buyers agent on behalf of the Ihara team, the listing agents for their unprofessional and disrespectful act.Right after escrow closed and got their money, Mrs. Ihara called and said “good luck to me, which I thought was weird!I read review about Ihara Team says “. need reconsider their business ethics,  they are dishonest,  would not recommend them, etc I agree wholeheartedly with this reviewer and if I read it earlier I wouldnt have listed my place with these.People need be careful when looking for a good and honest real estate service/agent and dont believe fancy advertisements, self acclaimed experts and #1 real estate, etc., as I was. 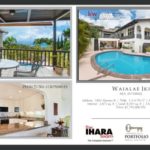