This is an archive of a consumer complaint published against iLendingDIRECT at DirtyScam.com-

While they were able to get me a lower loan rate, I ended up with a loan more than what I was refinancing in iLendingDIRECT.The person helping me (Travis) did not communicate two very important things to me during the process.First, I had no idea there is a $500 charge for refinancing. I am not happy with the amount, but I get it.Second, they applied a paint/fabric protection as part of my loan. I do not need the service, but when he told me it was included, I figured, why not.It was included as a hidden $500 extra cost. The entire signing process was very rushed with no effort to explain the agreement in detail.It was also locked, so I could not review it before reaching out with questions. Everything was done quickly on the spot.After calling to remove the added protection from my agreement, they told me it was not possible.I would have rather put that extra $500 toward my loan. They then had the audacity to call and offer me a gift card as a way to make up for the experience.I am so disappointed I well up when I realize I was just “had for my hard earned dollars.Having faith in people and companies gets harder and harder with every experience. 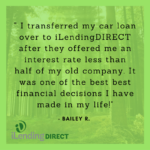