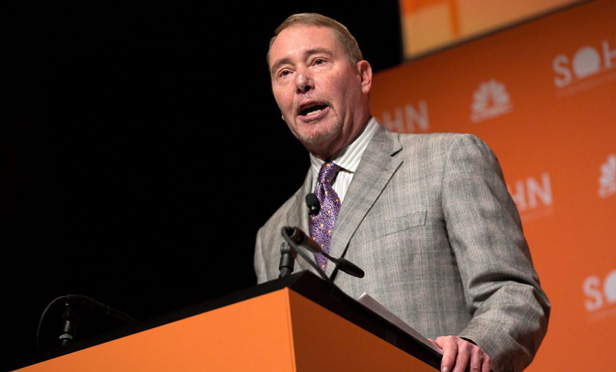 The expected reversals, Gundlach explained, include heightened volatility — both for stocks and Bitcoin — and the outperformance of emerging markets vs. U.S. equities.

He’s now neutral on the cryptocurrency and said he doesn’t “like having to worry that I’m going to lose 20% in an hour.” The fixed income manager is also neutral on gold.

Across the markets, “the regimes seem to be slowly changing. We’ve noticed that in 2017, when there was the lowest VIX of, basically, all time,” Gundlach explained.

“Some proclaimed then that it could be ‘a new world’ … and would never go beyond 15 due to a structural shift,” he added. “That was an illusion. In 2020, it averaged a pretty high number — nearly 30. It never got under 20 after the pandemic hit for the remainder at the year. It’s now at 24.08 and remains elevated.”

When did the “regime change” begin for the markets? Starting in 2017-2018, Gundlach said, “and one by one, we’ve seen trends start to reverse. There’s been an acceleration in the reversal of trends in 2020 … and I think that’s a harbinger of regime change for markets.”

He explained that he doesn’t “believe that we’ve really left the recession yet. My viewpoint is that you can’t just have a couple quarters of positive performance. You need to fully reverse the negative performance.”

In my view, we remain mired in a house of mirrors with all these [financial and economic] policies.

“There was much uneven performance within it, though,” he explained —  with the technology sector up nearly 44%, consumer discretionary stocks up about 33%, and growth stocks up 33%.

While three sectors did well, energy dropped by nearly 34%.

“So the spread between the best sector — technology — and the worst — energy — basically was nearly 80 points. That’s the largest spread I think we’ve ever had, at least in a long, long time,” Gundlach said.

“Real estate interestingly was negative, probably due to [issues in] commercial real estate. Financials were negative, which is interesting because the yield curve steepened. Value had virtually no return. Utilities were not doing well at all” in 2020, he noted.

“As for bonds, what did well last year? The things that were protected by the Fed. Investment grades … [of] AA, A or BBB [had] a 9-10% return. BB high yield was up 10%, and B was only up 4%. A year ago, one of my strongest suggestions was to not own B corporates but BB corporates,” Gundlach stated.

“Loans in the BB category, these are floating-rate bank loans, were barely positive,” he added. Also, there was a “big dispersion” between high-yield BB-rated loans and commercial mortgage-backed securities — with a spread of about 23% between these sectors.

A Deutsche Bank survey of investors conducted in late 2020 found that 23% favored U.S. equities. “But emerging market equities have taken a big jump up, and are nearly the same” at 22%, Gundlach said.

What’s not in favor with these investors is core fixed income. That sector was “quite popular” entering 2020, but entering 2021 “it’s fallen in popularity, and 34% say it’s their least favorite category,” he noted. “Cash is way down, with 28% disliking it.”

While Asian equities “are remarkably unpopular” with those polled, “I think that [view] is very unfounded and unjustified,” Gundlach said. “In fact, I would put them much higher up on the ‘like list.’”

“The dividend yield is actually higher for non-U.S. stocks by 1.1%. It’s been higher for about the past 20 years,” Gundlach said.

As for U.S. equity prices vs. those of the rest of the world, “maybe they’ve topped out. They’ve had a incredible run since the 1980s, … and since 2009, the U.S has outperformed by a factor of three,” he added.

“Yet we’ve seen the biggest setback [recently] in a while. I don’t think we can [yet] make a definitive conclusion. But it is interesting to note that this persistent rise is no longer in place in, basically, for the most recent six months to a year or so,” Gundlach said.

Looking at the largest emerging markets ETF vs. that of the S&P, it’s been outperforming “pretty meaningfully since June,” according to the DoubleLine executive — “when the dollar started to weaken.”

“It looks like to me that the downtrend has been broken … and that there’s room to run here,” he added.

“I said on CNBC [Monday], that emerging markets, particularly Asian emerging markets … , are a good place to have an overweight in your stock portfolio,” Gundlach stated.

“The U.S. has not topped emerging markets at all since the fall of 2018, which is coming on two and half years. It’s not a value trap anymore, an EM allocation; it’s starting to show a trend to outperformance,” he explained, though that outperformance is not uniform across all regions.

South Korea “is a very export-oriented economy, at about 43% a year or so ago,” according to Gundlach. “It’s recovery has been unbelievable.”

Across the emerging markets, though, results have not been uniform. Since year-end 2019, Latin American was down 11%. “Asia is driving the entire boat here and is up 35% amazingly … with a lot of that [being] Korea,” said Gundlach.

But Latin America “is certainly coming back, which I said in April and September, when I was pounding the table about it — if you have that risk tolerance,” he explained, adding that he sees the region as “a primary beneficiary” of the COVID-19 vaccine.