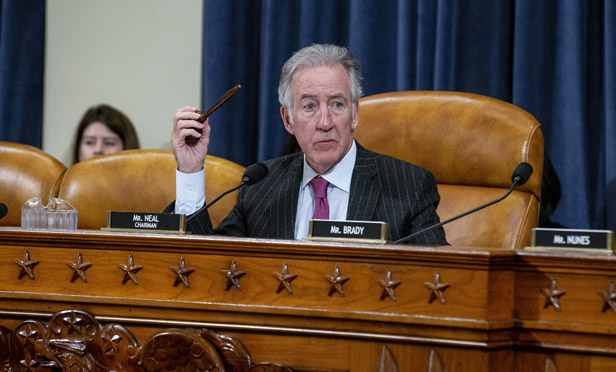 Rep. Richard Neal, D-Mass., the chairman of the powerful House Ways and Means Committee, was ­­­­reelected Thursday to that post.

“This past Congress, Ways and Means Democrats wasted no time with our majority. We passed legislation to lower prescription drug prices, increase Americans’ retirement savings, redesign the IRS, reduce the number of children requiring placement in foster homes, and provide expanded tax credits to low-wage workers and middle-class families,” Neal said in a statement.

Neal and ranking member Kevin Brady, R-Texas, introduced bipartisan legislation on Oct. 27, the Securing a Strong Retirement Act of 2020, which would boost the required minimum distribution age from 72 to 75.

The legislation builds on the Setting Every Community Up for Retirement Enhancement (Secure) Act of 2019.

Under current law, generally, those aged 72 and older must take RMDs from employer-sponsored defined contribution plans and traditional IRAs.

Neal and Brady’s bill would increase the age to 75, and would be effective for distributions required to be made after Dec. 31, 2020, with respect to individuals who turn 72 after that date.

The bill being attached “is a distinct possibility,” he continued, because it “has support from major bipartisan members of Congress” — Neal and Brady in the House, along with Sens. Rob Portman, R-Ohio, and Ben Cardin, D-Md.

“Once a bill gets attached to a major piece of legislation, such as an appropriations bill, it will almost certainly be enacted,” Reish said. If attached, “we will get Secure 2.0 this year.”

— Check out Ed Slott on RMDs, Backdoor Roths and the Death of the Stretch IRA on ThinkAdvisor.