This is an archive of a consumer complaint published against J C Whitney at DirtyScam.com-

I consider myself a shopaholic. I usually shop online and have been ordering from different online webstore from years. Recently, I ordered a tailgate and a dash cover from this website. Both of the items were showing in stock. After the order was processed, the dash board cover went out of stock and the order was cancelled. However, the tailgate order was confirmed.I had paid for both the items. I received an email later saying the that cost of dash board cover will be refunded in few days. So, I did not bother much. After a week, when I checked the status, there was no refund. Neither there was any update about the shipping details of the tailgate I ordered.So, I tried to contact the chat support and the guy told me that the refund is in process. And, the tailgate will be shipped soon too. He requested me to wait for a couple of days more. It was almost 15 days from the day I had ordered the items.I tried to contact the customer care again and they said that it was taking some time but the tailgate would be shipped soon. Another two days went by and I received an email saying the tailgate was shipped. However, there was no tracking details. The order was sent after almost a month.But I never received the refund for the dash board cover. I was calling the customer support every week and they were giving me excuses that they would refund the money soon.I was out of town when I received the tailgate. It was my neighbour who took accepted the delivery. I talked to the delivery guy on phone and asked him to leave it at the neighbours place. I came back after 10 days. When I opened the packaging, I found a dent on the upper corner of the tailgate.I right away called the customer support and asked them to refund my entire money and take the thing back. However, they refused to do so. They tried to put the blame on me. They accused me of letting the package delivered at some random place.The guy was very rough and he was using foul words as well. So, I asked for a supervisor and I was put on hold for 45 minutes. Later, the guy came back and asked me to call a day after as the supervisor was on leave. This is how the company treats its customers, I believe so.The man kept me on hold for almost an hour and then asked me to call back. This is ridiculous. He disconnected the call after informing me that the supervisor wasnt available and I should call back the next day. He hung up on me before I could have talked any further. So, I called back and the other man who was on the phone with me, told me that the tailgate was the last one available and they would need a month to send another item. They wont be able to refund the entire money and take back the order.I have never seen anything like this. All the other websites offer complete refund. I am very upset after ordering from J C Whitney. They have scammed me and have left me without any resolution. I am really frustrated but I tried to be calm on all the phone calls.It has been ongoing for two months now. The company has not refunded any amount, not even for the cancelled dash board cover. I did not even cancel that. It was their system that took my money first and then showed me that it was out of stock. But, did not care to refund the amount that was withdrawn from my card.I did receive shop credit, half the amount of what spent on dashboard cover. But I am not able to refund that amount to the bank. I even called the customer care understanding the procedure to do so. And, he replied that those were the earned credits and they cannot be returned to the bank. He said that I could use those credits to make the next purchase. The amount reflecting on the credit would be deducted from the price of the order.And, the company believes that I am ever going to spend even a penny on them. I am not even going to order for free, if they ask me to. I have had a very bad experience with J C Whitney. And, I have even checked the reviews on the internet. There are many such reports that say the company ditched them. I am not the only one.They took months to send me my order. Above that, they did not send it properly without any dents or problems. The tailgate looked as if it was a refurbished one. I am not sure though. But the quality was bad and the amount that the website charged was too high for the kind of stuff they sent me. Also, the pictures show a completely different product. I wouldnt have imagined that this is what I would receive.After all this, they did not respond to my emails on time. I was talked harshly by the customer service support. The chat support is even worse. The window would freeze whenever I would ask a question about refund. To sum up, I feel that J C Whitney is the worst online selling company. They take advantage of people.I have been robbed by the company. They website sucks. They show something and then send something else. I was scammed for both the items. Till date, the refunds have not been made. I am not using this tailgate that they sent me either. I just want refund for everything I paid for.Please never order from this website. They are not legit. 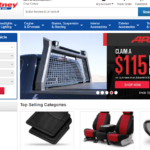