This is an archive of a consumer complaint published against Jackson Hewitt Tax Service at DirtyScam.com-

I filed my taxes with Jackson Hewitt Tax Service every year for 12 years before trying H&R Block. Now that Ive experienced the professionalism at H&R Block, I strongly regret not switching sooner.They were able to catch a mistake that Jackson Hewitt made in a previous tax year and took the time to help me understand the steps I needed to fix it.I alerted Jackson Hewitt and although they acknowledged they made a mistake, they have consistently refused to issue me money that I am entitled to.They stated they were going to fix the problem then when I followed up, all I got was the run around.One of their prepares (Kalani ?) finally got me in touch with someone at their corporate office and I was told I would be issued a check as part of their “accuracy guarantee but never heard from them after that.When I attempted to follow up, I once again got the run around numerous times. NEVER again will I do business with Jackson Hewitt.There were many times over the years that they couldnt answer my simple tax questions but I didnt realize how subpar their services were until I tried H&R Block.Jackson Hewitt may be slightly cheaper to use than Block (at least they used to be) but not enough to justify how they treat their customers and their lack of knowledge.You get what you pay for (or much less in this case)! Its only Block or Turbo Tax from now on!! 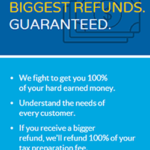