This is an archive of a consumer complaint published against Jake Woodard at DirtyScam.com-

When I started reading Jakes book, I was very confused. I had ordered the book written by Jake Woodard. And, all that because of the many great reviews were written about him online. I now believe that these reviews are planted. The guy has no sense of what is the writing and only likes to talks about things that do not make sense in practical life. My friend who had gone through his readings, referred me to check the book out. He has only bought the book but has not gone through it when he referred it to me. He got the book for the same reason, great online reviews.Later, he also repented for spending on such crap. In the beginning, I thought that there would be more to process the later in the book. I was expecting a lot of information, however, I ended up getting all confused. I am not sure if people are liking his books for any reason then what is that reason. Because I found none.The book was The power of your vision. When you go through the details of the book, you will find it offering insight about leading your life on your own terms. The book precisely likes to talk about being positive and ignoring the negative energies. However, when I read the book, I did not find anything connected to the title of the book. To some, the book may seem a bit interesting. However, it fails to address the things that it should be. Instead, it feels a bit political instead of being directive. He has also focused on emotions rather than being practical. He also talks about things that feel out of place.He has failed to attract me with his beliefs. Not just that, I feel him biased towards white people while he himself in one. With his writeups, he has tried to make white people the villains towards the discrimination against black people. This does not make any sense either. The entire stuff written by Jake is worthy of no attention.It seems as if he has gathered all the information from here and there and has failed to collaborate those facts to conclude as a synced writeup. Everything is here and there. I could not find any reason to like this author. He tries to be very spiritual and he has got nothing for those who are atheist. If the book reads, the power of your vision, wouldnt it be more practical?I am very confused right now. I do not know what to believe and what not to. Whatever he has written in the book seems flimsy and with no proofs. He calls himself a spiritual healer. However, I feel suicidal after reading his tactics and methods. He is a liar and likes to brag about his life history. He wants to persuade readers about his innate abilities to heal others through his bogus preaching. The guy is a real gem because he knows how to make others fool.I have been trying to find more about this guy since I read the book. It was very difficult to complete the book. But I did complete it to make sure I have not left anything to call him a fraud. He is not at all a life changer. You will find yourself stuck with thoughts when reading his book. Moreover, his podcast episodes are also bogus. Before you go ahead and spend on his book, I would suggest listening to his old podcasts. You will know that the guy is a serial poser.It was easy for me to find myself convinced that the guy is a scammer. Jake is nothing but all big words. He may talk nice and about all the good energies. But there is nothing to offer when it comes to real implementation. Can you believe one changing your life by teaching you nonsense? Or he may do it the other way. He may ruin your life if you keep following him. I have never experienced someone like him in my entire life. The guy can make you go around the bush and end nowhere.If you really wish to find better answers to your problems, you must find other options. This guy would only make things worse for you. His all the social media profiles are being monitored for showing viewers what he wants to pretend. I am sure he must be getting a lot of negative reviews. However, there arent many found online. But that does not mean that he is very popular among his readers. His podcast episodes also seem biased and his feelings are dented. He is no spiritual healer. He is a fraud. He is a mastermind behind the loss of many of his listeners.All he is doing is trying to attract pity by telling his stories. I am not sure if those are also true or not. He claims that he has gone through physical and emotional abuse and he has witnessed his sister becoming addicted to heroin when too young. He also claims that he has himself came over problems like obesity, severe anger, ADHD, porn addiction, alcoholism, suicidal depression and whatnot. Trust me, this guy should not be trusted. And, even if these claims are true, he cannot give others an unbiased opinion when went through such major setbacks in life. He is a fraud and a scammer with no intention to help others.It all comes to the same point. He is here to gain popularity and cash for real money. The guy is a fraud and that is what he is. He is not spiritual but an opportunist. He likes to take advantage of those going through pain. So, do not believe in anything that this man says. He would only lead your way to downfall. He is a liar and makes things up for cheating his listeners and readers. 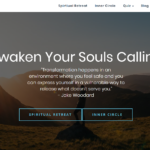