This is an archive of a consumer complaint published against James Lyndon Dean at DirtyScam.com-

Im Omar from FinancialCopywriters.com and me and my team have been scammed and ripped off by James Lyndon Dean from money.ca and Money Canada Limited.Whats even more surprising is that this individual blatantly committed these acts  and is still operating as per usual, possibly ripping off other companies or individuals.We have reported James to ctv consumer alert, legal aid among other anti scam and anti fraud agencies and will not stop until he is fully exposed for what he did.James knows what he did was wrong, a scam and he should do the right thing and refund us.We have proof of everything, messages, proof of payment etc.   I first met James via LinkedIn when he was pitching for Canadian businesses to get listed in his money magazine.On September 28th, he mentioned that he had a financial database/list of approx. 3000 Canadian businesses, including ceos and other influencers that would be very beneficial to me as a financial copywriter.At first, I wasnt very interested, as this was a bit random, but James was very convincing and assured me that the list was a good targeted one that he highly recommended. He told me that if Im interested, he needed the funds urgently, by October 1st and then he would send me the list.I decided to purchase the database and I e-transferred him C$600 for the database on October 1st. James confirmed receipt of the funds on Oct 2nd.On October 5th after still not receiving the product or hearing from James, I had a gut feeling something was wrong and that we were misled.I tried to reach out and no response. I left voice messages, reached out on LinkedIn, sent emails, and James ignored all contact attempts.After 3 weeks of waiting, no product was received, no explanation was given, no attempt was made to contact us or respond to our calls and messages and the list was useless at this time.The trust was broken, we were deceived, misled and we are convinced there was no list to begin with. We have bought lists before and its an instant process.It was not until October 21st, 20 days after making payment that I tried calling James around midnight and he finally answered.I told him we were misled, he was unprofessional, something doesnt seem right and we needed a refund and no longer required the list.James finally admitted after 4 weeks of us trying to contact him that he had to pay someone some money, or he was short on some funds etc.So it seems like James desperately and urgently needed some funds quickly for a payment or bill etc and chose to use false promises of a non-existent product or service to do so. Its now close to 3 months now since we paid James Dean $600 for a non-existent product.I realized very early on, probably a day or two later that we were scammed as James who was usually easily accessible stopped answering calls, emails, messages etc.We still havent received a refund, in fact I shouldnt say refund but instead our money back, as we were ripped off and there was no product to begin with.James Lyndon Dean has since disappeared, hasnt contacted us, isnt returning calls and hasnt returned our funds. Fortunately, we have proof of everything, the funds paid etc and confirmation that he received the funds. We have reported James Dean and his scam to some relevant authorities and agencies and will continue doing so to prevent him from ripping off others. 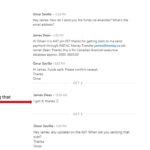