This is an archive of a consumer complaint published against Jane Allen CPA, PC at DirtyScam.com-

Jane Allen is inattentive and incompetent.  I hired her to do my parents taxes after making a move to this state.  Her staff is unorganized and does not follow up.When meeting with her, she talks in circles and shuffles paper often trying to come up with explanations but never really knowing the correct answer, as she is completely unfamiliar with her clients specific situations.After filing a tax return, my parents began receiving letters from the IRS due to owing an interest penalty thanks to Jane not informing them that they would owe and pay by the deadline.When I forwarded the IRS letter to her, she did not actually know what it was for and insisted that they would need to pay estimated taxes.Which, they very clearly did not. Working with her was frustrating and a headache. 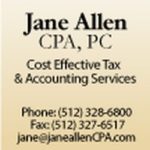