This is an archive of a consumer complaint published against John F Carter at DirtyScam.com-

I am a trader myself and embrace high-quality learning that I come across in day to day experiences. While browsing through the internet, I came across the profile of John F Carter. I had known about the guy through some people in my company but had never looked for myself as if what he offers. I also checked his website that offered different types of membership plans. At first, I thought of doing some research about the guy and found out that he has written books on trading as well. With such a huge experience and profound background, it was difficult for me to doubt his intentions. Hence, I subscribed for his newsletters, to start with.The newsletters were informative, however, I was not finding anything that was new. The strategies were all theoretical and whatever new ideas that he came up with, were a conclusion of mixed old ideas. Or to be precise, the same thing talked in a different way. The more I started reading his newsletter, I felt as if the main mantra was in the membership plans that he offered. The newsletter did push you to become a member, directly or indirectly. So, I thought why not give that a chance as well.I was trading fine. I was looking for some more strategies up my sleeves and a little help would not have mattered, if that would have helped at all. I opted for the options membership. The plan reads that it would help traders master options trading. I was anyway into options, so I decided to check that up for increasing my profits. I was making a decent profit and was looking for more room for developing my skills.Moreover, the system offered one months trial. The plan for $197 and the discounted rate for $7 for the first month. However, by mistake, the website charged me $197, even when the coupon was successfully applied. I tried to reach the phone number provided on the website and I was able to find someone on the other side after three-four tries. Anyway, the girl who talked to me asked me to wait for a month to help them process the refund.He was polite and understood my concern. She also pointed out another option. She said that she could help credit that amounts to the membership plan. And, in the next months membership charge, that amount would be adjusted. However, I was sceptical about that membership and did not know if I would be carrying it to the next month or not. Hence, I asked for a refund. She also said that the other option was quicker. However, I was adamant. She tried to convince me a few times. But I did not agree. I did receive a mail that the refund was in process.After that, I started checking the platform for and looking for their trading patterns. They did provide me with push notifications as well. I was getting a few decent profits, but not as I had expected. I was already into trading. And, was already doing what these guys were telling me to do. I did not find any value addition in my profit. It may be nice for beginners, but for me, it was completely useless. I was relieved that I did not opt for the next month subscription. However, I had not even received my refund that I was charged for the next months membership plan.I called these people and I was told that I had to cancel the plan, or else, the money will get deducted every next month. I was not sure because I had already done that. I even told that guy that I got a confirmation mail for the same. The lady that talked to me, in the beginning, helped me to that. I asked about a refund and they denied the request. They said that the plan was still active and they wont be able to help. I asked about the refund request I made for the first payment. And, they said that the request was processed and it would reach me in some time.They, however, said that the refund for this deduction wont be done. I requested that guy to cancel the subscription from their end. And, he said that it would be done. However, he did not send me any confirmation mail for the same. The third month, $7 was taken from my account. I checked the website and it showed that the rest of the amount was adjusted from the refund request I made.I am not sure what these guys are up to. But to me, it sounds like a scam. They said that there was no request made for cancellation of the membership subscription. I was very furious. I asked to talk to someone in charge of escalations and they hung up. I cancelled my card right away. I called my bank and cancelled that card. I have also disputed the charge through my bank and most probably would be getting some bucks back. However, this was a completely insane experience. But everyone experiences things for the first time to take lessons from it.I had my lesson and I am sure the website and this man, John F Carter would get the lesson sooner. I am also going to escalate the issue to the concerned authorities. I want everyone to know about my experience. So, that other traders do not get into the same mistake. This website is a bait for those who are impatient to make profits. However, in trading, things start falling in place with time and patience. There is no shortcut to success.If you wish to learn, try better tutorials and books. Invest with little amount and grow your skills with time. Understand the ins and outs of the market and the way trading is done. You would fail and must start over if you want to become a successful trader. But to do trust people like John F Carter. 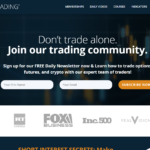