This is an archive of a consumer complaint published against Kayla Meyers / Renae at DirtyScam.com-

I met her on Seeking Arrangements and i gave her my bank info to pay her PayPal credit card for companionship. After realizing she paid without telling me i confronted her and she began getting defensive saying i offered and she didnt owe me anything. After i asked her to just pay me a portion back instead of companionship she proceeded to block me on all platforms and refuses to return my money. I am now out of 800 dollars with no way of returning it. If any man runs into her i suggest they dont do any kind of transactions. 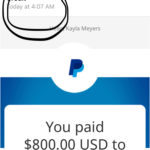