This is an archive of a consumer complaint published against Lecturio at DirtyScam.com-

Lecturio is from dr. Najeeb who considers himself a great teacher and other reviews say that too. However, I found this platform a bit confusing and with lots of unnecessary videos and lectures.              I signed up for Lecturio to prepare for the USMLE step 1. The website started by dr. Najeeb offers video lectures and question banks for those preparing for USMLE step 1. There are other courses too. But I tried this one. And, I did not like it at all.The videos were too big. I mean, for a small topic, he had covered the entire book. The arrangement of the entire course looked confusing to me. I was not able to get anything dr. Najeeb said. All the topics were slow and did not have enough that they deserved. I was very unsatisfied after going through the courses dr. Najeeb offers on his website.I tried to connect with him once and asked him a simple question. He took ages to reply. The email was replied after seven days saying that I would get back to you on this. Later, after 7 days, he had replied with the same bookish answer that I already had with me. The guy also has a lot of accent. I was having hard time understanding his audios. I managed to get used to it later though, because he talks a lot of nonsense most of the time that you get used to that voice.I had heard so much about him and lecturio, but to my dissatisfaction, I did not like anything about this website. The courses are all hyped and nothing. I have better faculties at my college. I have seen them doing hard work to make every one in the room understand what they are trying to. However, with this kind of setup that dr. Najeeb has, you make one video per topic and want thousands around the world understand it in the same way. This is not possible. No two students are same and the videos that are being shared through lecturio has nothing special about them.There may be people who would be able to make some sense out of these videos. But, not me and none of the students I know personally who have gone through it. The content is also incomplete for those preparing for USMLE.I am not a school going student whom you can impress with reviews and great pictures on your website. I am someone who has seen all of this before and seen them doing nothing for me. If you are here to spread knowledge, care to listen to your students. I mailed for a refund as I did not need the access further. And, I waited 7 days to get a confirmation mail as it happened the last time I asked for a question. And, it never happened. I did not get a reply even saying that the refunds are not possible.I used to be a huge fan of dr. Najeeb because of the popularity he enjoys among medical students and doctors aspiring for medical license. However, for me, he is a scammer and nothing else. 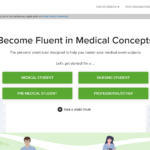