This is an archive of a consumer complaint published against Limbaugh Toyota at DirtyScam.com-

Purchased a brand new 4Runner from Limbaugh Toyota that was up for the 5k check up and an audio update due to my radio resetting while driving . First time here so if I come back Ill update (hopefully to be better).But likely will not be back and try another location in hopes of more professionalism.Called this morning to make an appointment and was told its first come first serve. Showed up at 10:45 and told it would be an hour.Waited until 12:45 to ask what was up. Told I was next in line. Another hour later still waiting and told again I was next in line.When I inquired why so long they said appointments must have come in and that some of the guys went to lunch.Sydney- I believe is the guy who ‘helped me had 0/5 customer care skills.Definitely did not make my first time experience with Toyota services a good one.I understand having to wait for these things but being honest and giving an accurate presentation in the beginning is simple customer care.I could have easily returned to work the other half of my day instead of taking off if I knew it would have been 3+ hours versus the 1 quoted and then again quoted wrong.May also be less upset if somebody would have come to let me know of the delay but not even that. 2:30 and my car just pulled up.Asked if the radio was reset and they said no and I could comeback tomorrow and it would only take 10 minutes.Asked if somebody could do it now and they said no because theyre busy lol wow. Lost an afternoon and half day of pay.Thanks Toyota! 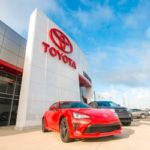