This is an archive of a consumer complaint published against Martins Handyman Service at DirtyScam.com-

The contractor  Jerry Martin and his wife/girlfriend, Christina S Mccown  reneged on their agreement with me. They are the same ones who also go by the names Martins Handyman Service and Jerry the Fence Guy. After paying nearly 100% on a group of three jobs  I paid nearly $7,800 out of nearly $8,400  he walked away leaving all three jobs unfinished. They assure you and then they break the promise. How can you rely on someone in a business like ours? Its only through words that we trust people and if that are not mentioned correctly i.e. they lie for god known purpose, how should be doing our business nicely? And in turn of this, their name doesnt get any worse. It is our name that gets a bad reputation. A reputation that is bad enough to not let other people do business with you anymore. And this is not even intentional. They are the real evils behind the work not getting done and the assurance that you have given to the customer is not done. Thats where the real limitation of business lies. If this will be the scenario, people are going to stop taking outsourcing work and only take those work, the team for completing which, they have, in house. So that they do not have to get dependent on anyone for anything. Because if they do, they have to take the blames for such things, for which they arent responsible and arent to be blamed. And the worst thing for any businessman is to see his/her businesss names repo, the repo that has been earnt by working for years and years going down for a mistake that isnt even of his own! But someone elses.He left one-third of my fence open and unfinished. He refused to complete the fence in accordance with our written agreement. I later discovered the other two-thirds of the fence was built with substandard procedures, without corner posts as promised by his wife and other substandard work.He also stole the remaining materials that I need to have the fence finished. He even removed and stole the galvanized steel post caps off of most of the posts. So, in essence, I have to pay twice for my fence post caps and one-third of my materials.I have also discovered that he did poor workmanship on my gate as my gate is now crooked and needs to be rehung. He claimed he moved the back fence line only nine inches yet it was moved out over 14 inches which clearly encroaches on the easement. In addition, he built the fence with huge gaps at the bottom with some gaps exceeding six inches. He also placed several slivers (less than 3 inches in 6-inch pickets) of cedar pickets throughout the fence lines when other fence contractors say these should only be at the ends of the fence lines if any.Jerry Martin also did an attic job which included vacuuming out all of the old insulation. One of the vacuum bags leaked loose insulation throughout my front yard and part of my neighbors yard. He walked away without cleaning up the mess he made. There is still loose insulation in my yard. Jerry Martin also started a power washing job. He used a product on my Austin Stone aka limestone that I did not approve. I was told by a professional power washer that, because he did not use a proper degreaser, he embedded vehicle grease deeper into my driveway. I was also told that he stripped the patina off of my limestone. The results of his power washing job were substandard.  He agreed to re-wash several areas if I paid for the power washer rental. He also did a part of the house that I had specifically stated he was not to power wash.The terms of our agreement were that I pay half on the first day and then pay the other half upon completion. It was my mistake that I paid most of the second half too early. And thats where the thing came into being. They were just waiting for this opportunity to land upon their laps. Trust is not taken as serious as it was taken in days previously. People are getting affected for things they shouldnt be. But who is to say and who is to be blamed? Once they con you, they run away with your money, all you got to do is suffer. Suffer badly, for the mistake that has been done by someone else.Even after Jerry Martin and his wife, Christina Mccown, walked off my jobs leaving a trail of berating words to me I reached out to mediate our agreement to resolve the issues. They refused to work through our issues, all of which were things to which they had initially agreed. They tried to pull the wool over my eyes as they did not realize that I would learn that they were doing things outside of our agreement. But what can you do? Can you help but be human? Can you help but trust anyone? After all, you have to live in the world and if you want to. You have to be dependent on someone or the other and that someone or the other will always, sometimes or the other be your trust breaker. I think thats how this world worksJerry Martin and his wife, Christina Martin, took complete advantage of my situation being located 200 miles away. They also took advantage of my weakened state due to my chemotherapy treatments. I have started rating them badly on their websites and every other website that is available so that I can make people aware of them and stop this from happening to them. Please, I encourage you to report for any such incident, if it happens with you. Do your duty as citizens and save others from such damage creators. 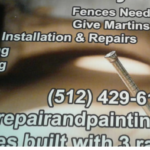