This is an archive of a consumer complaint published against Maximum Title Loans at DirtyScam.com-

Folks, lets keep the rating on this company as low as possible. Yes, I was able to get a loan from Maximum Title Loans place on the same day that I applied for it, but its a hassle from A-Z. Well first, when Jackie, whom I approached for a loan, asked me to provide 7 references.When the sheet that I signed was asking for 5 references, which I put my foot down on. After this, when not all the references were able to be reached.Jackie asked me to provide another few references, but I refused, stating that not everyone is always able to be reached right away.Luckily, the owner/manager of the company who was called waved further references. But this is just the beginning.Less than two weeks later, I was able to pay back the loan after receiving a big sum of money.However, returning the loan was far from hassle free.When I first reached someone on the phone to ask how much I would have to pay in total, they told me that since I borrowed more than $1,500.I would have to call a number and leave a message about which I was told I would be called back “within the hour.Well, it was more like an hour and a half without a return call, so I returned to the office where I got the loan from, and at first Jackie.The one whom I had approached for the loan, told me that I couldnt be helped there about this issue; but being that I was persistent.Jackie quite reluctantly made a call to that office when all of a sudden, I was given the exact figure, which I promptly paid.And now, waiting for the auto title, a lady named Christine called me up and told me that it would take 2-3 weeks to receive it back, whether by snail mail or at the auto title place.But during the week that reached one month since I paid back the loan, I left messages at the company for three consecutive days.Which were never returned, even threatening to call the BBB.So, the following week, I contacted BBB, and it was only after BBB contacted the company that they replied that they already sent out the check, which by the way, was not yet true according to what I saw later, but thats besides the point.I finally received it a week later, more like 6 weeks from when I paid back the loan, rather than the promised 2-3 weeks.And of course, not once did Maximum Title Loans ever call me back to let me know when I would receive it, let alone apologize to me.UPDATE: Christine, the liar who told me that I would get back my auto title in 2-3 weeks, had the nerve to call me, responding to my online critical review of Maximum Title Loans, to defend this company, stating that this is a family business and that mistakes happen with companies.NOT ONCE did she have the decency to apologize to me for the harrowing experience that I had, especially with the several week wait for the return of the auto title, but she did attempt to bribe me .If I were to remove my critical review of Maximum Title Loans, by granting me a loan in the future with a 50% discount in the first month, which is the same offer which everyone gets as posted on the company website.But just when you would think that this would be over from this company.It was not long afterwards that this slick sales rep named Kyle, both left me a voicemail and texted me about “great promotions for borrowing money in the future.Although I left both a voicemail and text back telling him that he had no right to call me unsolicitedly, he totally ignored my repeated requests, and called me last now on August 31, 2018.I agree with Christine that Maximum Title Loans is a family business  it is a business that looks to just benefit its own financial worth, while mistreating and lying to customers! 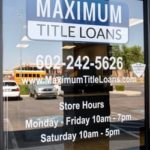