This is an archive of a consumer complaint published against Michael Shih at DirtyScam.com-

I joined Michael Shihs online course and was ditched badly. This was my first online course and I was very excited. Before joining the program, I had calls with Michael and he seemed to be a great person. He told me that everything is possible if we take the right steps. For me, he suggested that I enrol for the Print Profits and learn how to setup my ecommerce business.At first, I was sceptical about the whole idea. The first reason was that I had never gone through online course before and the second reason was the lot of scams I have heard about that happens online. These two things made me think before paying such a huge amount to someone I did not know.One or the other person used to call me from Michaels office every now and then. When I tried to connect with Michael, I only wanted to know a little more about the course. I had no plans to enrol for the online course. I did want to learn how to setup the ecommerce business, but I still was looking for more options.However, these people seemed fine. Michael also had word with me from time to time before I was about to pay for the course. So, it was six months back that I made the payment. I never knew it would all be a lie. And, yes, I did join their free session only to know that they offer this session to make you feel you are missing out something without this course. They will make you believe that there are easy ways to make money and the strategies are wrapped inside the Print profit course. I mean, I have known people who easily come into sweet talks. I wasnt like that.Michael is good at making people fool. That is the reason he has been successful in making money online. Those seeking help are vulnerable and Michael very well knows how to take advantage of that situation.When I enrolled for the course, I was charge right away. They did not offer me any part payments. I paid with my credit card. I did ask Michael why the fee was so high. And, he answered that I would be earning way more than I would be paying. And, then, I will think of this fee as too little. I did like that idea at that time and it did not bother me to pay him right away.During the course, I did understand that the guy was talking about ecommerce business and something strategies that are worth paying for. But, I never found those ideas extraordinary. All those ideas were basic knowledge that anyone could have gathered from free forums and YouTube videos.Setting up the Shopify store and other tricks were all simple and straight that one can find out online for free. Trust me, this guy has no shame. Michael made me pay such a huge amount for something that I could have gotten for free. The reason why he did not mention the course as basic one because he wont be able to take such huge fee for the modules then.I have gone through every module very carefully wishing that the next one will have the surprise potion. After the modules ended, I tried to search for some more videos as I never thought that they could end the course like that. I really felt that I had learned nothing. I called Michael after the course was completed and told him that I expected much more from him. He answered that the course has everything to offer and I was the one not able to make correct inferences from the training.He even stopped returning my calls and never answered it in the first place. I called people from him office to ask for a refund and they shut me out. I also did everything that was mentioned in the training. I kept doing things during the training itself. I employed every learning to find out what I have gotten myself into only to get disappointed all the time. These guys have cheated me and many others by showing them colourful dreams and dreams that are too good to be true.Michael Shih is a scammer. He with his partner has developed the worst program on the internet. He is trying to take advantage of people who are looking for earning profits as fast as possible. But, I believe that there cannot be any shortcuts to wealth. I am saying this after this worst experience of my life.More than the money I spent; I am sad about the dreams that broke right after looking at the training modules. I gave my best shot to learn everything that the course taught. But, the course wasnt enough. It felt as if I was looking at the counselling session which provided the goals but not the way to reach out to them. I made a fool of myself.I tried many times to request for a refund. Knowing that these people will never return my money, I did try hard to get it back. The duration to dispute for the amount from my credit card company has also crossed. So, I could not do that either.I wish I had never joined this course. I tried to find more people who feel the same way and did find few. These people have a great hold on the social medias and online forums. They delete bad reviews from their social media account as mine was deleted too.They know how to show off on the internet. And, that is the reason they are able to get so many gullible people on board. They have no empathy and have no virtue. Michael Shih is spineless and knows nothing about right ways of doing business. His online course is a shame and should be put in trash. 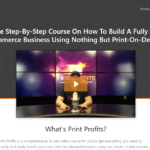