This is an archive of a consumer complaint published against MyGradPad at DirtyScam.com-

I would never use Brittny and her company MyGradPads again.After hearing about nightmare issues occurring in NYC with realtors I thought Id done enough due diligence on her and her company but was wrong.Instead I subleased an apartment from her client and had verbiage in the sublease that “the Landlord has consented to the Sublease “.This was/is NOT true so after PAYING her a realtor fee, I found myself stuck in a building where I was not welcome because she told me after the fact that I had to pretend to be the lessors cousin. Again, she got PAID for this which I find reprehensible.I “sublet using Mygradpad approval forms which was and again even paid a realtor fee.I had to go through the entire process again with the buildings leasing agency. Be very wary of using them. 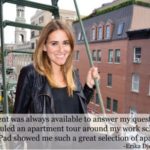