This is an archive of a consumer complaint published against National processing at DirtyScam.com-

We had our accounts with National Processing from last few years. They called us and we believed them. They guaranteed that they had the best processing fees and there was no company offering such a smaller fee for transactions. Moreover, they showed us some comparisons and we believed them.We started our account with them. They were very much helpful in initiating the process and we thought that we had the best company. We had two credit cards with them. We used those cards for paying bills and shopping. We never ever checked how much they were charging from us and we paid our bills on time.Because our usage wasnt much from the credit cards, we never given the bills much attention. We only knew that they offered cheap processing fees. However, when my friend, who own a business and operates with his credit card for payment and many other transactions happening in the office, was looking for another company as his card was expiring.We were told by the National Processing that we could refer them and they would provide extra discounts to those we will refer. Hence, we decided to refer my friend to this company. He was already in talks with other credit card providers. However, because we had talked so much about Tranont and the company, that he started looking at what they were offering.He compared everything of National Processing with other companies. And, to our surprise, National Processing was the most expensive one. The other companys fees were too less. We were shocked. We checked the statements and found out that we were paying too much for the interest that our amount for all our payments made through credit card was surging manifold.We checked there were so many hidden costs to the bill that we were never told about. We felt so bad. We even thanked our friend and asked Tranont to cancel our cards. We told him that we would be looking for some other business.To this, he said that it would be done. He asked us to clear all the outstanding amount. We did that. However, the cards were not cancelled even after that. We called him for months, he never replied. We were not at all in a mood to pay the yearly fee or any other fee attached to the card. We had already stopped using those cards.Ultimately, we tried to block those cards online. We went through every step, but were disconnected at the end. We had to call the customer care hundred times to get the job done. After a lot of headache, we were finally able to get past that stupid company.I am still shocked that I had been paying so much while other companies offer such great payment and fees options. These people are liars and frauds. They made us believe that we were with the best credit processing company. Which we were certainly not. I am never going to refer them to anyone. 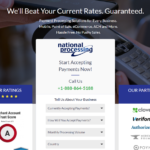