This is an archive of a consumer complaint published against Nevada State Bank at DirtyScam.com-

I chose Nevada State Bank because A) it was close to me and B) I always try to support local institutions.They closed the branch closest to me, but since I hadnt had any problems to that point, I stayed with them and made the longer trek, even though I considered changing to a closer one.This would prove to be a costly mistake. Normally I have a fairly good handle on my finances, but this past summer, due to a series of events, I had less money than usual in my account, but still calculated I had enough until I got back to town.A couple weeks after getting back, I went to make a deposit, and my balance was less than my deposit by several hundred dollars.Taken aback, I asked the teller why. She made a response about X, Y, Z that I didnt really understand, so I asked to speak to someone.As it turns out, an officer was in the bank, so he printed it out and walked me through it.Turns out I had been repeatedly hit with Insufficient Funds and other various charges.I had not received *any* notification of this, and told him as such.He replied that they sent something in the mail, which Im sure they did, but I never got it, and had no knowledge.There was no other attempt to contact me  not by phone or email, both of which they had on file.I pointed out to him that I had not come into make a deposit, I still wouldnt have known, and it could have been thousands of dollars.He shrugged indifferently and said there was nothing they could do about it.A few weeks later, after weighing everything, I went into close my account.Oh wait, there were *more* fees I had to pay before I could close my account.Once again, the teller couldnt explain it clearly, so again, I asked to speak to someone.This time, I got a higher up in the bank, who walked me through.I reiterated my story, pointing out the lack of knowledge and notification, and the potential even higher cost.Again, the impression was that they simply did not care (though in the higher ups defense, they were much more pleasant to deal with than the previous officer, who seemed to be annoyed to have to deal with me).I closed out my account, and ended up going to a branch of a national bank that was the closest to me.Completely different experience  warm, engaging, full of information even at opening (Ill review them once I have more experience).Bottom line: Whilst Nevada State Bank is local, this branch at least clearly does not care at all about their patrons, and blithely shrug off suggestions for improvement.I told both people they should have automatic text and email notifications for these circumstances, rather than rely on snail mail in this day and age.Their response was I needed to set up online banking. Clearly, my suggestions were not taken seriously or even considered (the reply was immediate).But I suppose that would impact their ability to rack up money from fees.I have to say, Im very disappointed. Ive banked with a lot of places in my various residences around the US and world.Never I have had a situation like this, or been treated so indifferently.Under no circumstances can I recommend someone bank with NSB.Im just glad I happened to find out about the situation before it hurt me even more financially, and hurt it did. 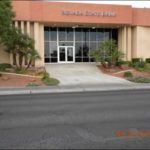