This is an archive of a consumer complaint published against Nguyen Thu Tax Service at DirtyScam.com-

I was referred to Nguyen Thu Tax Services by a coworker and expected great service but boy was I wrong!On my visit in April of 2013 I was passed off to 3 different people who all worked on my tax return (no wonder they were screwed up).It bothered me slightly but I tried to be understanding because they were busy and it was close to the tax filing date.My taxes were done, I was charged what I felt was a reasonable fee, and I received my free gift.Awesome right? WRONG! Fast forward to October 2013.. I received a call from an anonymous young lady who works at Nguyen Thu Tax Services informing me that there has been an error on my taxes and the IRS will be sending me some paper work which I will need to forward to them ASAP.I was immediately alarmed and informed her that I live in an apartment setting so at times I dont get my mail and whom should I contact should this occur.The young lady stated that she was unsure but would call me back with more info.Big surprise, I never received a follow up call. Finally I get the IRS forms and I attempted to call Nguyen Tax Services in order to forward them the forms BUT no one ever answered and theres no answering machine.So one day I decided to stop by unannounced during my lunch hour.The woman who assisted me stated that my forms would be ready the following business day since I could not stay due to the 30 minute drive from/to work (which meant theres goes my lunch hour and gas due to their mistake!) I showed up Monday at 12:30 which is and hour and a half past their normal opening time and no one is there!I wasted yet another lunch hour and gas! I left a note at their door asking for a call ASAP!No one called me. I call their office and finally someone picks up the phone.I inform the lady on the other end of who I am and that I was waiting for a return call.She informs me that she remembers me and that she received my note and intended to call.She explains that she was ill and that was why she was not in the office as promised.I then try to schedule another pick up time for 5:30 at which point she tells me she will try to have someone there. TRY?!?!I rushed through traffic at 5pm get to the office by 5:35pm and get the paper work from the woman.At this point she apologizes for not being there before and informs me that she was late opening the office due to car trouble.Wait?!? Didnt she say she was sick before?! When I try to explain all the issues Ive had she blames the IRS for the mistake and cuts me off by saying “anyway. How about some good customer service and a real apology for the inconvenience and errors?!Basically dont go to Nguyen Tax Service unless you want crap service, problems with the IRS, and to be bounced around like a ping pong. 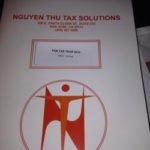