This is an archive of a consumer complaint published against Nick Vertucci at DirtyScam.com-

I attended the free seminar offered by Nick Vertucci. I got the information from a pamphlet and was really excited to learn more about real estate and investing in real estate. The pamphlet said that after seminar, one will receive free gifts such as smart watch, power charger and many others. The pamphlet also stated that the experts will share great and unknown facts about the real estate investing.Referring to no hidden costs, the seminar did have my attention. However, when I checked in, I was very disappointed to know that all that they offered was a lie. To start with, there was no free gift. Instead, they did offer free lunch and drinks. Believe me, it tasted so bad that none of the us attending the seminar was able to have it.Moreover, the information that they shared in the seminar was very general. All they do is refine the free websites and take out leads and call them. This is nothing but cold calling. According to them, one out of 30 they call reply back. However, there is no surety that they would make any further deal.The seminar was all about what Nick thinks and how he works his strategies for maximum profit. I believe that the real strategy is to scam people and convince them to join their course which costs $1695. They offer few DVDs for this amount and those have nothing in it.I heard few feedbacks from those who had already checked those DVDs and they did not point any good thing about it. Moreover, you pay for something that is nothing but scrap. In the two hours seminar you will hear it all the time that you must give 50% of the ARV for making profit. I mean, just one point for 2 hours. They will brag about their success and how they made so far but noting productive.The old man at the seminar was shouting so loud that it felt as if he was fighting. This guy had no sense of how seminars are taken. The name of Nick Vertucci was all over the seminar. But, he never showed up.At the end, they tried to check who else was interested in purchasing those DVDs. And, what I believe it was close to none who wanted to. They felt like begging for buying those DVDs. I left the seminar right away.I did get calls from these people once in a while. I have told them not to call me and I have no interest in their DVDs, but these guys wont listen. I am stuck with these people calling me and bothering me at odd times. However, I am glad that I didnt fall for their fake intelligence.I would warn others as well not to entertain these guys. You will only sulk for the two hours sitting at the seminar. These guys are scammers. And, you should stay away from Nick. 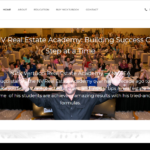