This is an archive of a consumer complaint published against Oakwood Homes at DirtyScam.com-

A year ago we began our home search with Oakwood Homes Conroe and have had nothing but a nightmare since it began.In March they sent their contractor (S & B Construction) out to evaluate where we wanted our home, where the driveway was to be placed, and all the information for the job so they could give the correct information to the lender.Billy Young, the owner of S & B Construction, and my husband discussed a 10 x 900 ft crushed concrete driveway.All the paperwork he sent over included this information as well (information attached).In May we signed the final paperwork which included our driveway financed into the loan.When S & B came out to evaluate and begin work, Mr. Young stated he was not including crushed concrete, nor would he continue the job if we pursued it.He left and went straight to Oakwood Homes Conroe and Matthew Skaff called stating they were also not completing the job or eating any cost.Matthew stated if we pursued it we were not only trying to get something for nothing, but we were also taking food out of the mouths of Billys children.We then contacted Mr. Skaffs supervisor, Eddie Harrison, who said he would look into the matter.At that time we had no idea Mr. Harrison and Mr. Young were good friends for many years and most of Mr. Youngs work not only came from Oakwood, but nothing would be resolved because of their friendship.Eddie Harrison demanded $2,000 in the form of cash or a cashiers check and halted all construction on our home.We hired an attorney and Mr. Harrison called harassing us telling us he would not respond to the attorney and was going to pull our deal completely if we did not follow through with payment of $2,000.He also said we needed to sign a statement releasing him and Oakwood Homes of any liability for the driveway in the future.He also refused to do any kind of base or dirt work for the driveway.He claimed he was perfectly fine pouring rock in a pasture for us to drive on.He then changed his mind and said he wouldnt deliver the rock until we provided the proper base for the driveway, paid $2000, and signed his paper.Mr. Skaff and Mr. Harrison knew we needed a home and we felt hostage to his demands so we signed the letter and paid the money.We then rented a dozer and did the base and dirt work ourselves to create some kind of foundation for the crushed concrete to drive to our home.We were promised 14 loads of crushed concrete laid on our driveway.13 loads were delivered and there is such a slope on our driveway now we have deep ditches and valleys along the side of it which if someone drives an oversized vehicle could roll over into our pasture.Billy also shorted us on the front so one side of the driveway from the road is covered in crushed concrete and one side is mud.Again, a 10×900 crushed concrete driveway is what was financed into our home and what we signed for, but didnt get.The driveway by the house is washed out and we back up into a mud pit.We also paid an additional $3,000 to S & B Construction for a culvert and fill dirt for the driveway that S & B claimed was not covered as part of the driveway.Since moving into our home we have had nothing but issues.We were promised if we signed the final paperwork in October for the construction loan they would complete any repairs within the week.Today is February 6, 2019 and our home has cracks in the ceiling throughout our home, misaligned doors, holes in the floor, the home is off centered, moldy insulation, an incomplete shower, the list goes on:Our AC went out and we had to go the weekend without ACWe had septic coming through our drain because the plumbing was installed incorrectly and it vapor lockedWater Leak in the marriage lineDrain in the bathroom was leaking from day 1 (per Oakwoods contractor) and caused moldy insulationThe water is still leaking at the T line under the houseThere are 2 pages of repairs still needing to be completed and we have been put off several times by Oakwood Homes.Yesterday Mr. Skaff was kind enough to accidentally call me (thinking I was someone else) and complained all about this nightmare of a customer he had and all the details of our sorted “drama and stated we had threatened to “take things to the next level and he wishes we would. Mr. Skaff had no idea he was talking to me, ABOUT ME.A year later we are out $5,000 total for things Oakwood Homes said were included in our loan, but AFTER THE PAPERS WERE SIGNED they claimed were not and wanted separately.At this point we want our house fixed. We want to know why construction was done so poorly.We want to know where our extra, undocumented $5,000 is. RUN! 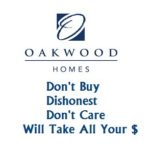