This is an archive of a consumer complaint published against Padgett Business Services at DirtyScam.com-

My parents used to be customers of his, George Pan. Pan is nowhere near professional, he is also very disorganized and can never meet any deadlines.Pan could not prepare the tax on time, he had to file an extension almost every year.For the Last year taxes, Pan did not complete it until August, which is just ridiculous.And the previous year, Pan made a major mistake on my parents taxes, causing my parents to not receive the full tax return money, but luckily my sisters college caught his mistake.When confronted with such a big error that he had committed, he did not apologize but instead acted as if nothing happened, yeah a decrease of two thousand dollars is no biggie to him.And this year, because of his poor time management and irresponsibility, my sister had to suffer.My sister lost financial aid from her college because he completed the taxes in August and the deadline was May, but to no ones surprise he could care less.Save the stress and heartache of losing money by not going to him for any service.If I could I would have given him zero stars. I despise this man and his lack of compassion for others when he is the one who caused all of the problems.P.S. He overcharges. My parents should not have to pay three thousand dollars for a service that was mediocre. 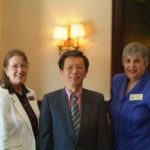