This is an archive of a consumer complaint published against Panda Research at DirtyScam.com-

Its been around a month that I am trying to get through with this website. My experience so far has been torturous. Nothing came out as they have advertised on their website. I signed up with them for insurance and credit score studies. With this, there was some sign-up bonus that I was due for them to credit me.However, after a month, when I thought, I have successfully worked for good amount of surveys, I earned nothing. I have seen many people on the internet complaining about this company. They do offer free sign up, but they make you spend more than you ever earn. I wasted $10 of my mobile data on these surveys and they approved only $10 by the end of the month when my standing balance was showing $33.I understand that there were some stuffs that was undone, but it was not so bad and I should have earned atleast $20. But, I couldnt because they did not let me. They lure people in joining their website by stating that anyone can become rich. But, that is only a bait for making more individual join their scam.Even if you do not consider them a scam, because they do offer lolly pops for members to keep believing that they are genuine, they are not worth the time that you spend on them. You can utilize that time for better things.Their surveys are too huge and lengthy, and they pay nothing in comparison to the efforts that you put up with them. They are highly unprofessional and such every bit of blood from your veins if you do not understand what they are up to.I wrote them emails after I got the mail for $10 approval instead of $20. But, they took it for granted and asked me to review them all. That I would anyway do, but why the approved amount was less than the worked surveys. When I ask these questions, they play dumb and deaf.It is so frustrating. Last mail that I sent, I called them unprofessional because that is what they are. Since then, they have not replied to any of my mails. Even if you are not a scammer and you felt bad about me referring to you one, isnt this your responsibility to mend things up or clear the misconception that I have.They did not take any initiative for that because they are busy running time of other people as well. They seem challenged when it comes to answer the queries of members who are putting their time and money for taking surveys in a hope that they would be rewarded for it.But, as you know, companies that are not legit, give no importance to such things and keep running their fraud until they are caught. I would like everyone to know that this company is a bogus company and would try it best not to pay the money of its members. 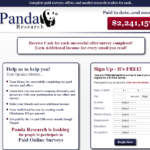