This is an archive of a consumer complaint published against Philip L Liberatore, CPA at DirtyScam.com-

I heard about Philip L Liberatore, CPA on the radio KWVE 107.9 FM so I thought maybe I should try this IRS Problem Solver guy.I have not had any issues with IRS but I know that my case isnt simple either, so I thought why not try since I moved around the area.I called to set up an appointment and spoke with Rene. She was very helpful and professional over the phone.Cool thing was she sent me an email on the things I need to prepare and bring when I come to my appointment.The tools I was asked to fill out was not used at all when I got to my appointment.On the day of my appointment, I arrived at least 5 minutes prior to my appointment and was helped professionally by Rene.I had to give a deposit of $250, which I thought would be more than enough for filing my taxes.Rene never fully explained nor made sure that I understood that it could potentially be more than $250 (when I talked to her on the phone).I just found out later on that I would still have to pay an extra $400.So I thought, Im not in trouble with IRS and I could have my taxes done WAY CHEAPER than this so I told Joseph C (the guy who helped me out after Rene) that I used to pay my tax preparer $150 and at this point I dont plan on spending any more than $250.He left and talked to someone for about 5 minutes and came back saying they will refund my $250 instead.No negotiations at all. This all happened after he collected my data and showed me a rough draft of the numbers (though he said he could improve the numbers when its finalized).Another thing I observed when he was going through my w2 was that he wasnt sure of some numbers he was telling me. “I think E was your contributions, Im not quite sure.I mean, when I heard him say this, I thought to myself, “Does he really know what hes talking about? “How long has he been doing this? “I thought I came to a professional company who has been in business for 30 years.Im sure these people have been in the business for a while but I just felt unsure when he said “I think on the things he said.Another instance was when he was comparing outcomes depending on certain possible scenarios I could have been, he gave me a number that turned out to be different when he punched numbers in and he defended himself that he probably is missing something at this point but will all be straightened out when its finalized.So I started doubting how good/bad my outcome would be when the one preparing it was not even sure.Another thing was that my previous tax preparers finished while Im sitting down waiting and talking to them, while this one would have to call me and was uncertain of when my taxes will be done.I hate waiting games, honestly. If I were to sit and wait for them to call me with no specific time frame of the wait, I would rather not.He mentioned that he had another person to assist after me and he would have to do mine later after he takes the next appointment and his break after that.So I thought if this would be inconvenient for me and still pay way more than I used to pay, then why would I entrust my taxes to someone new to me.Besides, I was just curious of how good they are since they are a bigger company than the people I used to go with.I had a feeling that they were not as friendly as it seemed on the radio ad.Well of course, marketing strategies. What I have seen with other tax preparers in the past: if they knew that it was your first time with them, they would go out of their way to make your experience a good one.With Phil Liberatore, I didnt even get an offer to lower their fees at all or at least get an explanation as to why those fees are that high, they just told me straight out, “we will give you back your money and escorted me out of the door.Hey, no worries at all, there are other people out there who can do the same services I needed for a way cheaper price. ?? 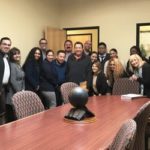