This is an archive of a consumer complaint published against pof.com at DirtyScam.com-

I am divorced and after 8 months of completely being single, I thought of starting my life again. Someone told me about plentyoffish.com and I decided to give it a try. I registered on this website and paid for a months subscription. Only after first day of registration, the messages started coming in. Everyday, I started getting plenty of messages.It was difficult to choose whom to give a chance. However, the scrutiny became easier after the messaged turned unusual. Majority of the messages were obscene. I started blocking those guys. I did talk to few people who were decent in the first few messages. However, meeting them was hell.I did meet 5 people through the website and it turned out to be the silliest decision of my life. The first person I met, provided me a fake last name. He must he trying to hide something. He did not have social media accounts or may be trying to hide it. He looked like a felon to me. He smelled bad. Only on the first date, he wanted to have sex. It was too much obvious.He was a stalker too. He left me voice messages and there were 25 missed calls. I was really scared to meet him. The other guys were not much different. Some were very cheap. They did not want to pay for the date but wanted sex.It went on with all the other guys I met. I had to block all of them. They all were too desperate. There was nothing much to seek from the website. So, I asked them to delete my account. They said that I will have to do it myself by logging into the account. So, I deleted the profile.I tried thrice, but the error page came up. Later, I was not able to sign in to my profile. So, I called the customer care number again and they said that the account wasnt deleted. I requested them to delete it from their end. They said that it was not possible, and I will have to do it myself. I kept getting email notifications.I tried after few days and the same problem persisted. The worst part was, the guys I met on that website were all frustrating and tried to track me down on my social media account. While I blocked them on the Facebook, one of them created a new profile and sent the request again. Mistakenly, I added him and later realized that the guy was the one I met through this website.He abused me and called me with bad names. What a shame. This dating site does not have any way to verify people and have the worst members from around the world. No one was looking to have a serious relationship. All these men wanted was to sleep with some random girl. I get sick of thinking about the incident. 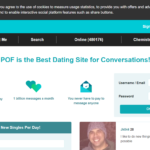