This is an archive of a consumer complaint published against Referral cars at DirtyScam.com-

I heard about this company from a friend who drove uber and said that he has recently started advertising on his car with Referral cars. I am an uber driver too. When he said that he has been doing this for near a week and does not know what profits are in store, I thought of trying it, as it takes nothing to put a sticker on the back of the car.So, I checked the website and found out that they ask for the zip code to assign you a sticker. Based on your location, they give you certain option to start advertising. When I checked the website, it felt simple and easy. And, what was any different than driving a car with sticker on and without sticker on.Thinking about all the pros and cons, I decided to use the company for making some passive income. I had heard about such options before and have never tried one. To give this a shot, I chose the sticker and started driving with it on my car throughout the city. I even drove to other cities in the meantime. So, it was after 15 days that I realized I must check my referral cars account to see if I had made anything out of it.After 15 days, I found nothing on the account. So, I thought to roam a bit more for a month and so. I continued to drive with the sticker. After around two months, I did not see any changes to the account. There was no payment information listed on it. It means that I had earned nothing from the advertisements. So, I decided to check for sure. I asked my friend to use the sticker and make call to the referred number.He did so and showed interest in the ad. The manager assigned from the company to me, told me that I would be paid certain amount if someone would show interest. And, there was no cash paid to me. After two months, neither me nor my friend was paid a penny. And, on that day, it was clear that something was wrong with the entire process.So, I called my manager and told him the same. He said that the referral commissions are calculated at the end of every month and it would show later. So, I kept driving. After a month and a half, I again tried to check the account and there was nothing.I did get an email saying that I had earned a coupon with restaurant.com. I tried to redeem the same and it said that it had expired. I received the coupon the same day I tried to redeem it. Then also it showed expired. I called my manager and he told me that there would have been some problem in sending the coupon and he would send that again.It is now a week and I have not received the coupon. I called the manager and he asked me to wait some more. He said that these things take time. He disconnected the call. I understood that these guys are never going to pay any commission for the work I am doing. Although it was not an extra job but every time my expectation was getting hurt. I planned for so many things that I would be able to do after earning some extra cash.When I spoke with my manager, he made me believe that I may not have to worry about any cash problem after advertising with them. This is not the case though. I am sure there have been quite few leads because of the sticker at the back of my car. However, these guys wont tell me about that. The manager now tells me that these things are not guaranteed to work every time.He told me that sometimes it takes a year to get the first lead. He never told me that before I started advertising for them. This is a bogus company and their promises are all lies.I have been driving like crazy to make the ends meet, but these guys have no empathy for those advertising for them. I know I am not an employee of this company, but advertising for them makes it their responsibility to sort out the prevailing problems with their system and process. I am not going to call them all the time and ask for resolutions.They never turn my calls back. I am the one who is calling to check for the updates. This is insane. They have not shown any interest in fixing the issues I had since start of the collaboration with them. More than 4 months, and I am stuck with 0 balance with them. Is that possible? If yes, why are they even trying to offer such options to drivers.It is going to take some time for people to understand their scam. And, though there is no effort involved, we expect passive income and its broken month by month. And, this company shows no sign of commitment. I am going to take off that sticker and stop benefitting the company in a hope that they will return my favour.Because they are leeches who can only suck your blood but can never do anything good for you. This is getting so difficult. My friend has already taken off the sticker two months back. He did the right thing and I am going to do the same. Or else, I would be hoping that these guys would change which would never happen for sure.A complete scam. Do not ever believe anything that these guys tell you. They will use you and would leave you without any resolution. They wont accept your call, neither they would entertain your problems. There is no way to check how many referrals happened through your sticker. So much of a mess they have created. 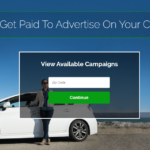