This is an archive of a consumer complaint published against ReGen Hair Clinic at DirtyScam.com-

I visited ReGen hair Clinic to check for the procedure and find the quotes for the same. They checked my scalp and suggested few options and transplant was the most opt one. I asked them to send me the quotes with all the details of the procedure. I went back and thought of referring other clinic from the USA for more quotations. I mailed few of them as well.They sent me the quote after two days inclusive of all charges. I found it to be too expensive. So, I contacted them and asked if there could be any concession. But, I was told that their procedure is among the finest ones in the world and they provide best results. They assured that the prices are comparatively less than the other clinics. And wanted me to pay in advance to book for the procedure as they were packed the next two months. They said that if I delay, it would become difficult to get an appointment for the next two months.I did the payment and booked the date for a week later. The next day, I received emails from other clinics from the USA. I was shocked to see the difference. They were doing it for much cheaper cost. Even combined with the travel charges, the prices were still cheap. I called the consultant from the ReGen hair Clinic and asked them for the difference in price. I was bombarded with the marketing tactics. Andrew, who was in talks with me became rude for a moment and understanding the heat of the moment, he tried to get in control.He started talking about the hidden charges and other bullish reasons. I did not want to get into that conversation and decided to go with the surgery. As per the appointment date, I reached the clinic. I was taken for the blood tests and other reports. Later, the doctor checked me again and draw the hairline. It was done in no time and I was taken to another room for the procedure.It took few hours. My grafts were not much. After the HT was done, I was given medicines. I returned back to my apartment at night. I had swelling and pain. They did give me pain killers which was useless, but never informed me about the swelling. I called Andrew and he said that it was normal. But, they should have informed me at least.The next day, they called me for checking the condition of the swelling and the grafted area. It was bad. They did treat me for the same, but I had to go through a lot of trouble and pain for almost a week. After a week, the pain subsidized but the hairline design did not suit my face structure. I am not happy with my results wish I had received those emails before I paid them for the transplant. ReGen hair Clinic should be shut down. 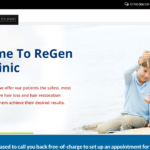