This is an archive of a consumer complaint published against Residents Medical at DirtyScam.com-

In Residents Medical promotional video on YouTube, they show you a person, firstly in casual clothes. This person gets to know about Residents Medical from, seemingly, his colleges notice board.And then he goes and searches the firm from the Internet. After that, he confirms an appointment on https://residentsmedical.com/.Cut to, it shows this person doing research and assignments at various places, until Ross Michaels, i.e. name of the person, becomes a Resident. This video is very alluring for anyone doing medical, to fall for the trap.I was one amongst the many that fall for the crap that Residents Medical, charges for! Firstly, we were a batch of four people who registered for their program together. After talking with the other three, I got to know that I wasnt charged the same as the other three were.Two of us were charged 1,00,000 and the other one was charged 1,50,000 and I was charged 2,00,000. When asked to justify the pay disparity, we were told that the faculty that was going to assist us was different and hence there was a difference in the amount that was charged to us.This gave us the first shock after we signed their agreement. We discussed amongst ourselves, what should be the real reason behind this? And decided to enquire the question individually in our own manner!After inquiry, it was founded that the doctors that they lists and brag about what they are on board with them are not actually on-board with them. But they, for a fact, outsource them to provide services at Resident Medical.If you go on their website, there is not a single clue that you would know about this fact. There are seven MD doctors that they claim are with Resident Medical. But they are hired based on requirement and demand and in-flow of students.Because of this there a pay disparity which the individuals wont ever come to know because they are assigned doctors on the basis of what theyd be willing to pay. There is also a separate person who decides on the basis of background of the students who applies for the course, what he/she can be willing to pay.It is shocking to know that in the name of education, such a business racket is run. Just to expose such a racket, me and my other three friends, we went on knowingly and put our money at risk. After that, we were subjected to their, so-called training at other institutes.We demanded to know the name of institutes, at which they say in the video, which they are going to assign each one of us to. We were shocked at the response they got! The director of Resident Medical called four of us, individually and then told us to stop what we were doing.He said that he could give us the name of institutions only on one condition and that is, we were not allowed to share the name of institutions that each one of us got.In our next meeting, we lied to the director and agreed only to get the name of institutions that we were supposed to do our internships from! After getting the names of the institutions, we got to know that the institutions werent what they promised us at the start.They promised us some different names and they gave us some other names. The reason, behind which they said, was that the names that they had given us before werent available on the dates they were sending us on internships. When we asked to talk to the institutions and check for ourselves, they denied us.One of the institutions in which one of our friends had contact with was the one where we managed to ask, just to keep a check on whether or not we were delivered truth, was the one that said to us that the institutions laboratory and doctors were available on that date.And on further inquiring, we came to know that Resident Medical had no contact with them. In turn, they said that they were shocked to hear that Resident Medical was using their name for any such purpose.The fact behind this revelation is that Resident Medical uses the Everest Foundations assets to provide high-risk agreements with them so that they can provide donations to different institutions throughout the country.We got to know later that Resident Medical also has few court records in which people have previously charged them of the same thing which we were in shock.All four of us were not made Residents as shown in the YouTube video. And when we werent made as such, we complain about it and demanded our money back!Our application to gain our money back was denied by the director and the reason that they gave was our performance. They said that because our performance was poor, we were denied residency.This is an absolute lie. All four of us were above the average performance score, in all our criterion. The real reason behind it was, as spoken to us by one of Resident Medicals employees was that the director found us too nosy.He said that the director found four of us as a threat to his business and that is why he denied us Residency.Please beware of such faulty people who can ruin your career and time in the gains of nothing. Please beware of the promises they make in their YouTube videos and dont go by the videos, instead of demand in written whatever promises they make and monitor at the end of the contract whether they have fulfilled or not what they promised you at the start.We are writing this to provide awareness against such faulty business doers. We are going to fight this case and make sure Resident Medical suffers for what it does, but meanwhile, we are urging everyone to please think before applying for resident Medical. 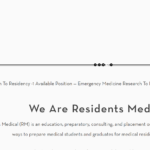