This is an archive of a consumer complaint published against Richard Meirowitz at DirtyScam.com-

I am one among top Amazon reviewer and have been following the reviews of the other reviewer with screen ID, RWM. This guy is a fraud and is manipulating the Amazon system to bring his ranking on the top. I did some research and found out that this guy is no other than a lawyer named Richard MeiroWitz. It is disappointing to know that a lawyer can go beyond his ethics to get the rewards, but it is true in every sense.Richard plays with the reviews and the votes to make his way to the top reviewers and enjoy the perks that this grade entails. While we know that the Amazon system is out there for long and has been offering a platform to judge the product and make the buying decisions. The reviews that gets the most Helpful votes, are considered to rank the reviewers to the top list. It is a big deal to be on top as it attracts the companies and they offer these top reviewers financial as well as free product offers. In no way, people like Richard would want to lose that place. Hence, Richard deceit and if necessary, artifice to be at that position.The amazon system is no doubt incredible, but it has a glitch that allows people to delete the review by which the votes get deleted as well. The reviews can be copied, and the negative reviews goes away. So, all Richard does is, deleted the reviews and before deleting, he saves the content on the computer and creates a new review with the same content to get a clean slate.I very much feel that he knows how to upvote his own reviews. He is a master mind in paying with these glitches which has made him one of the top reviewers. He is a flop lawyer and pretends to be a top one. So, if you have a company and you are thinking of hiring Richard for reviewing your products, you may need to rethink your decision. You wont like to hire someone who is using the skills to get his matters straight.Richard is a scammer and not a lawyer. He is fully entitled to be put behind bars for making an attempt to ruin an old and trustworthy system. He is a consumer lawyer and do not knows the laws by which consumers are protected. But, he still keeps cheating users by posting fake reviews. Being an imposter is not going to help him in long run. He is soon going to be caught as I have already done my part here.If you ever go through the reviews posted by Richard, do not believe any word that he says. He is a criminal and should be treated like a criminal. If you wish to save your reputation and stay away from negative promotion by unethical means, stay away from Richard Meirowitz. 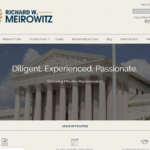