This is an archive of a consumer complaint published against Robert Georges at DirtyScam.com-

If you are looking for a financial advisor to help you with financial decisions, beware of Robert Georges. He pretends to be the one, but he doesnt know anything about PPP or investment banking. He is a scum bag who will take your money and will run away.He follows a pattern with all his clients. He would try to gain your trust and if you are great at understanding the nuances of investment and finances, he would not even contact you. But, if he gazes your incapability to make prompt decisions regarding finances, he would rip you off.Robert knows that he can fool people who have minimum knowledge about the banking formalities. After, he has understood your level, he would suggest all kinds of options to look legit. Once, you are impresses, he would ask you for the advance payment.Roberts fee is also highly evaluated as his expertise. He would charge you somewhere between $25000 to $30000. He will ask you to pay the amount in advance and would not accept part payment. If you pay him, it would be your biggest mistake.Once you made the payment, he would keep asking for more time because of documentation. Sometimes, you will hear him asking for more and unnecessary files and other times he would directly claim that the documents are improper.He will never have the alternative to fix the issue but will land you to a dead end. So, you will lose your money and will invest your time for nothing. He would end up everything so neatly that you will not discover the scam until you reach for some other assistance. By that time, he would be gone.If you get lucky to catch him red handed, he would try to abuse you and will not return your money. He keeps travelling from one country to another. He has fooled people from Dubai, Hong Kong, Australia and many other countries. So, it would become a challenge to locate him and confront him.He has not been caught yet. However, I am sure he would be soon. The way he is scamming people would not stay hidden. He will be behind bars. He took away my money and few people whom I referred to him. We will not make it rosy for him to walk away.Robert George is a con artist and he does not have the expertise to help you with your financial decision. Although, he is an expert in scamming people. I would suggest reporting him as soon as you find his fraud. He will not give you much time and will run away. So, act fast before he gets away with your money and take legal aid to get him behind bars. 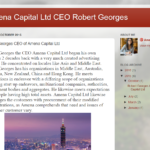