This is an archive of a consumer complaint published against Rodan and Fields at DirtyScam.com-

It is upsetting to see people making so much money by cheating their customers. The pulse app by Rodan and Fields is the same scam that is only there to fool customers. Being a consultant is not an easy job, when we mostly depend on the technology so much. When I first listened about the app, I believed that it would make a lot of things easier for me, as it claims. However, nothing of that sort happened. I have been trying to get through the system error and start working, but no luck. Reaching the company isnt easy too.I did not check the reviews before paying for this shitty app. I should have. There are dozens of reviews that says that the app does not work. I was using the old version of this app and had few issues. But those were manageable. However, after they released the new update, I have been stuck, not able to access my data and I have to delete things and resave it, a plenty of times.The app is acting weird. I have tried to contact the company as well. But, they are not willing to help at all. All they say is to reinstall the app. I have already done that 100 times. Moreover, I have hard reset my phone. This is ongoing for a month now. They have not been able to solve bugs in their system. While the one that was using before, without any update, was also not very great. I had issues. But those were mostly manageable.I had to call the customer care a few times in the past as well. And, they seemed the same. How can these guys forget that we are paying for this app? I work from home and being a mom of 2 years old, it becomes difficult to manage customers and orders on a laptop or a desktop. I hardy get time to consistently check my computer. In such case, phone is the only handy device that seems useful.When I started to use the app, I found it difficult to manage data properly. I consulted the support from the company and had no luck. For last two months, I tried making the most from the app, because I had no choice. Somehow, I was coming in agreement with the problems that was a part of the app. When the app released its latest update, I had no idea that I was going to ruin whatever little I had with this app.And, it happened exactly as I never expected. I thought that the company would be working on the bugs that I had reported. Paying for this app is a big deal when you are working alone and that to part time.After they released the update, I lost all my data. I was not going to update the app, but the app started freezing and the support suggested to install the update. I deleted the app, reinstalled the app after updating when it stopped working. I logged into it but the previous data wasnt there. Moreover, it started kicking me out after every 10 minutes or so.This is still the case. It has been more than a month and all my work has gone haphazard. There was no other way to check any previous details. Whenever I call the support, at first, it takes huge effort to get a reply from them. When they reply, they just send me basic steps that I have already carried plenty of times.I believe that these guys do not understand how important it is to answer to the orders of your customers. I am not sure if I have been receiving orders or not. Or, if I am, I am not able to return the reply. The account wont work for more than 10 minutes. Also, when it is logged in, the entire thing is so slow that it takes lifetime to toggle from one button to another. This is a crap app. I am not able to use it at all. I would have used it for 2 months with some problems.So, I asked for a refund. This was the biggest mistake one would ever do. The company thinks the customer wont retaliate. There is no way to connect with these guys on phone. Or at least, I was not able to. I only had the email address to contact. These people return emails in days. They do not even send acknowledgement emails after receiving the complaints.I would like everyone to know how bogus the company is. There is nothing one can do to work with this app. Once the problem starts, there is no one to take care of that. Either these guys do not care at all about their customers or they do not have competent developers to work on the bugs. If you wish to save your money, never pay these posters. They will take away your money and would not help you understand the app at all.Or, you would never be able to work with the app as it will always be in problems. Rodan and Fields is a fraud company. Stay away! 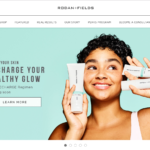