This is an archive of a consumer complaint published against Ross & Associates at DirtyScam.com-

I made an appointment over the phone and when I arrived, there address is incorrectly listed so I was a bit lost, I finally found the Ross & Associates and they were not there.I waited for 10 more minutes and they finally arrived, followed by two other customers one of which had the same appointment time as myself with a written confirmation of his appointment and the receptionist said she didnt have him down and he would have to come back next week.Rodney came out and tried to make it right for him but was openly displeased and it felt a bit unprofessional.I then got to sit down and talk about an old tax issues that I needed help with, he didnt close the door despite other people only a few feet away who could hear everything.His secretary then came barging in and cut me off mid-sentence without so much as an “excuse me.The entire process with them was just like that.I will say that what I needed was completed in the time frame that was promised, although with my incorrect contact information listed.The price was just fine and they are local but everything felt hard and a bit messy and from everything I witnessed with other clients, the receptionist has bad customer service skills and makes it hard to be a repeat client. 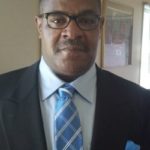