This is an archive of a consumer complaint published against Royal Queen Seeds at DirtyScam.com-

I would like to keep the story short, the one that cost me huge money and pain at the same time. It started when I checked the website of this company and wanted to order some of the seeds, I had been planning to get hands on to. The seeds were expensive but as I said, I had been wanting to do this for a long time. Moreover, the local shops did not have the one that I was looking for.So, I ordered from this website. I even checked the rating and overall rating was decent. I did not check the low rated comments though which I wish I would have. However, after ordering the seeds from this company, I received the order after five weeks. Within that time period, there was no one to help me with my emails that I sent these guys. For once, I thought that these guys wont be sending my order, however, they sent it.I was happy to receive my order. However, the seeds that they sent werent exactly the amount I ordered for. So, I emailed these guys about the problem and after a week, I received a reply that they would be sending me the remaining order within few days. I knew they wont be sending me those seeds before a month. So, this time, I did not take pain of emailing them.Within that time, I sowed my seeds and waited for them to grow. I am a busy man. I own a business and I cannot look for things all the time. After a month, when the seeds did not grow, I waited for the other order to arrive before making any calls.The next order was received after seven weeks this time. They had sent me the seeds for the wrong plants. However, that was not much of a trouble as the seeds worth the same price. I also thought maybe these would grow, unlike the ones that did not grow which was sent for the first time.I did everything that was instructed for the proper growth of the seeds. I did check few sprouts two weeks later. But, it stopped then and there. It has been more than two months when the first order was received and these guys have done nothing to resolve the problem.The seeds that were sent to me costed a lot of money. And, it also got me through a lot of trouble of emailing and following up with the team. However, these guys do nothing to send me the refund. These are very expensive. After paying to these people, I did check the prices on other websites and I found them much lower. At first, I thought they would be sending me quality products. And, did not have any issues paying some extra bucks. I never knew that these guys have no sense of responsibility. They failed at acquiring a customer who could have ordered at least twice a month.But now, I am never ever going to order from these guys. These people are worthless and scammers. Their products never work. I have tried it twice and found them very disappointing. These people do not even reply on time and when it comes to resolving issues, they are at the end of the conversation.I had to contact them several times to get the right person online. However, he also did not know what exactly he could do. He said that there was no proof that the seeds never grew. Moreover, he said that the seeds that they send are very authentic and the problems never occur. This was a lie. I checked for the negative reviews and all these reviews say the same thing. These people send seeds that do not grow and there are many customers claiming the same problem.The company is bogus and all their claims about authentic and great products all lie. The seeds have been the way they arrived. There has been no advancement even after 2 months. These guys asked me to send pictures for confirmation. I did that. They have not been replying since. They are a bunch of idiots who feel that they could cheat customers and sleep at night. However, I am not going to let them cheat others. I would write about them wherever possible. To call them and talk to them is also very irritating. I have been wanting to get through all the mess and find a resolution. For which, I requested them to at least refund half of the amount which may cover their loss, however, they are not ready for that either.Few days back, when I called the customer care, I was told that I was lying. They disconnected the call saying customers make these lies to get their money back. When I called back again asking for a supervisor, I was told that they never talk to their customers with that tone.I am surprised and shocked as well. I have found it so irritating to talk to people who work here that I really feel like leaving the money behind. They have called me a liar plenty of times. They are the ones who have cheated me. But instead of making up for that mistake, these guys are constantly making me feel disgusted.If you ever want to buy seeds, look for other options. And, do not order in huge amounts. Limit the order. Once you are confirmed that the company sends good product, then only order again. I could have saved a few dollars if I had taken little precaution.But one thing is for sure, Royal Queen seeds arent royal at all. These people are a bunch of scammers who are only looking to fool their customers. 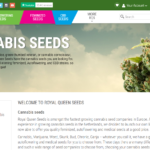